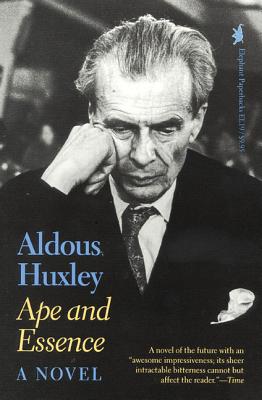 When Aldous Huxley's Brave New World first appeared in 1932, it presented in terms of purest fantasy a society bent on self-destruction. Few of its outraged critics anticipated the onset of another world war with its Holocaust and atomic ruin. In 1948, seeing that the probable shape of his anti-utopia had been altered inevitably by the facts of history, Huxley wrote Ape and Essence. In this savage novel, using the form of a film scenario, he transports us to the year 2108. The setting is Los Angeles where a "rediscovery expedition" from New Zealand is trying to make sense of what is left. From chief botanist Alfred Poole we learn, to our dismay, about the twenty-second-century way of life. "It was inevitable that Mr. Huxley should have written this book: one could almost have seen it since Hiroshima is the necessary sequel to Brave New World."-Alfred Kazin. "The book has a certain awesome impressiveness; its sheer intractable bitterness cannot but affect the reader."-Time.

Aldous Huxley (1894-1963), one of the most important English novelists of the twentieth century, is best known for Brave New World, Point Counter Point, Crome Yellow, and other novels, as well as his Collected Short Stories, also published by Ivan R. Dee.