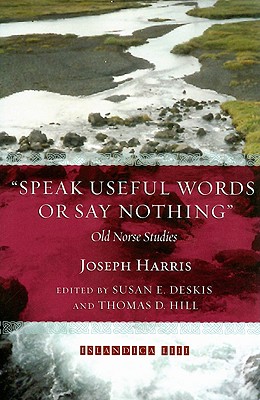 This selection by Susan E. Deskis and Thomas D. Hill of twelve of Joseph Harris's most important essays underscores the range of his work from critical readings of canonical texts to philological elucidation of Old Norse and Old English literary works to discussions of larger theoretical issues such as oral theory. One of the central problems of medieval literary scholarship is the aesthetics of traditional and oral literature, and how and whether one can meaningfully discuss the literary history of an oral genre. Harris's studies of such topics as the Old Norse short narrative and of the Masterbuilder tale focus precisely on such problems and offer brilliant readings of specific texts as well as models of literary historical discourse. Speak Useful Words or Say Nothing also shows that Harris's work frequently bridges the divide between the Latin and Christian sources and the native vernacular traditions that together found their way into Old Norse and Old English literature.For more about the Islandica series, visit http: //cip.cornell.edu/Islandica.

Joseph Harris is the Francis Lee Higginson Professor of English literature and Professor of Folklore at Harvard University.