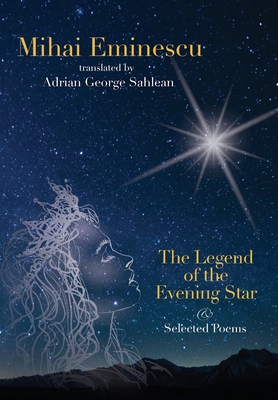 By Adrian George Sahlean (Translator)
$30.00
Usually arrives at our store within 4-7 days

Poems and prose by Romanian 'national poet' Mihai Eminescu (1850 -1889), considered Europe's last great Romantic poet and celebrated by UNESCO as Year-2000-Poet-of-the-Year. Translator Adrian G. Sahlean is viewed as the poet's premier voice in English, and his rendition of Eminescu's masterpiece "Legenda Luceafarului" (The Legend of the Evening Star) was twice staged off-Broadway in 2005 and 2008. The mirror display of texts in the bilingual volume allows for instant comparison of the original with the English version for those with philological inclination.Revered and celebrated by Romanians the world over, Mihai Eminescu is often described as the essence of the Romanian soul. His work encompassed every genre of poetry as well as prose, fiction and journalism, and helped modernize the literary use of the Romanian language. Eminescu is considered Europe's last great Romantic poet, but his legacy transcends the confines of Romanticism, Western traditions in literature and philosophy, and influences from the Far East; blessed with the touch of genius, his synthesis creates a personal world illuminating the life of man, and the cosmos, in archetypal images of universal appeal.