Truth Is a Lonely Warrior (Paperback) 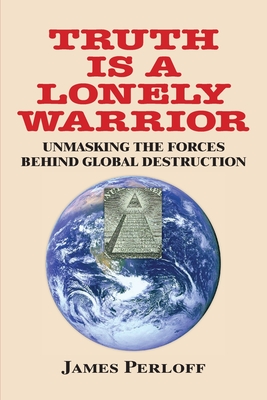 Twenty-five years after publication of The Shadows of Power, James Perloff returns to the venue of political history, and takes you where the mass media won't.- Who benefited from the mysterious sinking of the USS Maine?- Why did President Woodrow Wilson order the manifest of the torpedoed Lusitania hidden in the archives of the U.S. Treasury?- After the official inquiry into the Pearl Harbor attack, why did Admiral Kimmel and General Short - the commanders at Pearl Harbor - want to be court-martialed?- Why was the Soviet Union given control of North Korea after World War II, when the Soviets did nothing to win the war in the Pacific?- What did Congressional Medal of Honor recipient James Stockdale reveal about Tonkin Gulf (the event used to justify intervention in Vietnam)?- How did "Operation Rockingham" lead America into the Iraq war?- Since its founding in 1921, what small organization has produced 21 Secretaries of Defense/War, 19 Treasury Secretaries, 18 Secretaries of State, and 16 CIA directors?- How did Jimmy Carter go from a generally unknown figure to Presidential nominee in just seven months?- Why has America had decades of destructive inflation (understated recently by the Consumer Price Index), when there was zero NET inflation from the days of the Pilgrims until the early 20th century?- Why did the Vietnam War last 14 years - and end in defeat - when it took us only 3 and 1/2 years to win World War II?- What did the head of the Ford Foundation tell Congressional investigator Norman Dodd that made him "nearly fall off the chair"?- Is it possible that many kings and other monarchs of past centuries were not as evil as they've been portrayed?- What American capitalists were given landing rights for their private jets in Moscow - at the height of the Cold War? - What KGB defector predicted glasnost five years in advance - yet was ignored by the major media?- Who is at the top of the pyramid on the back of the dollar bill?- Why was the USS Liberty attacked in 1967, and why was there no Congressional investigation?- The official explanation of 9-11 - where do we BEGIN to name the holes?- Were the Beatles a set-up?- Who financed ecumenism and the decline of Christian faith?- What are world elitists saying about population control?- What are courageous doctors revealing about vaccines that the major media won't report?- Does weather control go beyond seeding clouds? What is behind the recent spike in weather disasters?- How did the Establishment trick conservatives into supporting its "free trade" agenda, destroying millions of U.S. jobs?- Who's pouring billions of dollars into the "green" movement?- 1984 - the amazing ways in which Orwell got the future right.- And how does ALL this tie together?If you are one of those who senses that something just isn't right with the explanations we are given for wars, our dying economy, and other world events, this book may be just right for you. Countless lies have been planted in the corporate-controlled media to benefit the rich and the few; these lies have become "fact" through the mechanism of frequent repetition. Refuting such lies with credibility requires in-depth analysis. Therefore, beware of reviews of this book which attempt to debunk it by pulling a sentence or idea out of context. Read the book for yourself. Truth Is a Lonely Warrior is a ticket to de-brainwashing.341 Pages. Fully indexed. This book is also available for instant download in a Kindle edition with many hyperlinks that can be clicked to access supporting material. This book can be gifted directly from Amazon to anyone you think might benefit from it.Visit YouTube for Bill McNally's interview of James Perloff on Truth Is a Lonely Warrior.