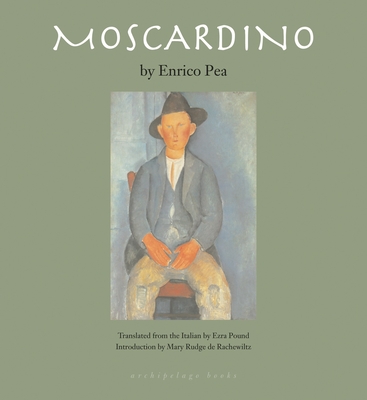 A small masterpiece, Pea’s lyrical autobiographical novel paints a fiery and intimate portrait of an old man through the bold brushstrokes of his grandson. The passions and tensions between the old eccentric and his brothers play themselves out in mythical sketches before a vivid backdrop of the hills of Lunigiana. Moscardino, the first novella of his tetralogy, Il romanzo di Moscardino, is anarchic and haunting. Pound conducts Pea’s vernacular song, allowing images to flow from the land, the flesh, and beyond.

Novelist, poet, and playwright Enrico Pea (1881–1958) spent his youth traveling. He lived for years in Alexandria, where he struck up a friendship with Ungaretti. He published Moscardino in 1922.
Translator: Ezra Pound’s work as a translator stretched from Confucius and Li Po to the troubadour poets to Paul Morand and Enrico Pea. His interest in "regionalism" most likely attracted him to the work of Pea.

This is just announcin’ that Italy has a writer, and it is some time since I told anybody that ANY country on earth had a writer. Like Confucius [Pea] knocked ’round and done all sorts of jobs. ...What’s it like? Well, if Tom Hardy had been born a lot later, and lived in the hills up back of Lunigiana, which is down along the coast here, and if Hardy hadn’t writ what ole Fordie used to call that ‘sort of small town paper journalese.’ And if a lot of other things, includin’ temperament, had been different... that might have been something like Pea’s writin’—which I repeat is good writing... Writes like a man who could make a good piece of mahogany furniture. — Ezra Pound, 1941 (from his Radio Speeches)

...when the phantasmagoria of Pea's prose momentarily lifts in order to reveal almost Cézanne-like notations of local landscape, we hear the old miglior fabbro turning out sentences as splendid as any in Joyce. —Bookforum

Moscardino is a lovely book, printed and bound with grace by Archipelago. —Ralph: Review of Arts, Literature, Philosophy, and the Humanities