Japanese From Zero! 2: Proven Techniques to Learn Japanese for Students and Professionals (Paperback) 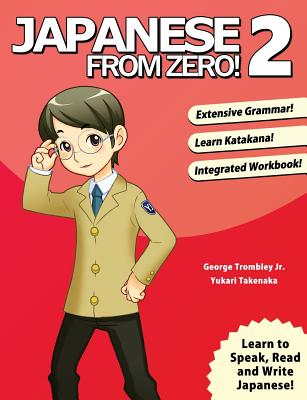 By George Trombley, Yukari Takenaka
$32.95
On Our Shelves Now

Japanese From Zero is an innovative and integrated approach to learning Japanese that was developed by professional Japanese interpreter George Trombley, Yukari Takenaka and was continuously refined over eight years in the classroom by native Japanese professors. Using up-to-date and easy-to-grasp grammar, Japanese From Zero is the perfect course for current students of Japanese as well as absolute beginners. In volume two of the Japanese From Zero series, readers are introduced to new grammar concepts, over 800 new words and expressions, and are also taught the Katakana writing system.

George Trombley is a professional Japanese interpreter who over the past 16 years has interpreted for corporations such as Microsoft, IBM, NTT DoCoMo, Lucent Technologies, and in countries throughout North America, Europe, Asia and the Middle East. In addition to Japanese, George has also co-authored the Korean From Zero! series and consulted on Chinese, French, and Spanish language books. Yukari Takenaka moved from Himeji, Japan to the United States, and taught Japanese for over 10 years while co-authoring custom lessons for students that eventually became the basis of the Japanese From Zero! book series. Prior to becoming an author, Yukari worked in Japan as a professional in the medical industry. She continues to write Japanese related materials to support her passion for teaching Japanese.