My Secrets of Day Trading in Stocks (Paperback) 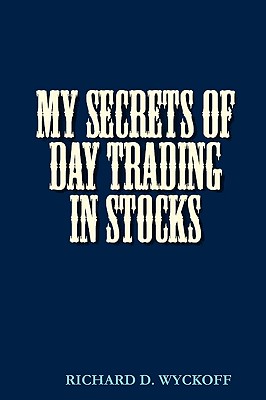 Continuing as a trader and educator in the stock, commodity and bond markets throughout the early 1900s, Wyckoff was curious about the logic behind market action. Through conversations, interviews and research of the successful traders of his time, Wyckoff augmented and documented the methodology he traded and taught. Wyckoff worked with and studied them all, himself, Jesse Livermore, E. H. Harriman, James R. Keene, Otto Kahn, J.P. Morgan, and many other large operators of the day. Wyckoff implemented his methods outlined in this book, in the financial markets, and grew his account to such a magnitude that he eventually owned nine and a half acres and a mansion next door to the General Motors' Industrialist, Alfred Sloan's Estate, in Great Neck, New York (Hamptons). As Wyckoff became wealthier, he also became altruistic about the public's Wall Street experience. He turned his attention and passion to education, teaching, and in publishing expos's such as "Bucket shops and How to Avoid Them", which were run in New York's The Saturday Evening Post starting in 1922.