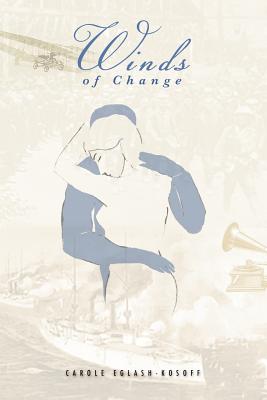 By Carole Eglash-Kosoff
$18.95
Usually arrives at our store within 4-7 days

Winds of Change is a whirlwind novel of bi-racial love set against those forgotten decades that include the Spanish-American War, the San Francisco earthquake, and World War I. It deals with segregation and injustices to Southern black and white communities during the post Civil War period when old attitudes persisted and interracial love led to disastrous consequences. The racially charged love and conflict of the critically acclaimed When Stars Align have become more entrenched. Josiah, Bess, and Stephen discover facts about themselves that refute everything they believed regarding both their parents and their racial background. Loves are thwarted as they each struggle with echoes of their past. It is a tumultuous time in American history that includes the inventions of airplanes, automobiles, telephones and movies, amidst decades of lynchings and economic turmoil. Racial biases complicate lives and relationships as newly arrived immigrants vie with white and Negro workers all trying to gain a piece of the American dream. It is a socially relevant, historically accurate, saga of decades often overlooked in American history. Winds of Change follows the next generation from those we came to know in When Stars Align. Carole Eglash-Kosoff lives and writes in Valley Village, California. She graduated from UCLA and spent her career teaching, writing, and traveling to more than seventy countries. An avid student of history, she researched the decades preceding and following the Civil War for nearly two years, including time in Louisiana, the setting for Winds of Change and When Stars Align. It is a story of bi-racial love during a period of terrible injustice. It is a story of war, reconstruction, and racism, but most of all; it is a story of hope. This is her third book. In 2006, following the death of her husband, she spent several months teaching in the black townships of South Africa. Her first book, The Human Spirit - Apartheid's Unheralded Heroes, tells the true life stories of an amazing array of men and women who have devoted their lives during the worst years of apartheid to help the children, the elderly, and the disabled of the townships. These people cared when no one else did and their efforts continue to this day.