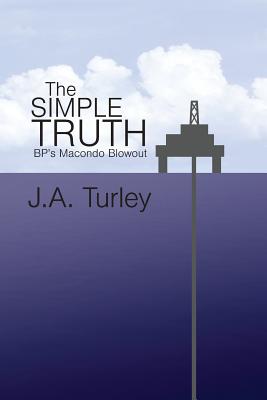 On a quiet Tuesday evening in April 2010, experienced leaders aboard Transocean's DEEPWATER HORIZON drilling rig ran pressure tests and declared BP's deep oil-and-gas well to be secure. They were wrong. Hours later the well blew out, followed by explosions and fire that killed 11, sank the rig in the mile-deep Gulf of Mexico, and left behind mourning families, a disastrous environmental oil spill, and questions without answers. Questions like: Who, how, what caused BP's blowout? THE SIMPLE TRUTH is narrative nonfiction, often called a nonfiction novel (fact-based fiction). The story dramatizes the drilling and demise of BP's 3-1/2-mile-deep Macondo exploration well, albeit at the hands of fictional characters, surrogates for survivors and the eleven perfect witnesses who died that terrible night. Readers are invited to join the crew aboard the rig and share their lives as they drill ever deeper and make the costly decisions that define the business. And when just one of several such decisions goes wrong and the clock ticks down, readers, too, will better understand the simple rule: Zero tolerance for failure, because offshore there's nowhere to run. J.A. Turley leans on his decades-long industry career as an offshore-drilling expert to unravel investigative findings about the catastrophe. As a degreed petroleum engineer, ocean engineer, and professor of petroleum engineering, he narrates the story as if he and the reader are on the rig, immersed in the character-rich world of offshore drilling. His detailed and extensively referenced Epilogue documents the simple truth about the CAUSE of BP's Macondo blowout. Readers who are also interested in the EFFECTS of BP's blowout (the oil spill, company culture, energy independence) are encouraged to read published nonfiction titles on the topic by renowned authors and journalists, including: Joel Achenbach; Bob Cavnar; John Conrad & Tom Shroder; William R. Freudenburg & Robert Gramling; Peter Lehner & Bob Deans; Stanley Reed & Alison Fitzgerald; Carl Safina; Loren C. Steffy; and others.

J. A. (John) Turley grew up in San Diego, California. Advanced degrees in petroleum engineering and ocean engineering from the Colorado School of Mines and the University of Miami and a three-year petroleum-engineering professorship at Marietta College preceded his oil-and-gas-industry career. His two decades of offshore drilling- and project-management responsibilities with a major U.S. energy company began with the Gulf of Mexico, evolved to the North Sea, were bolstered by executive education at Harvard Business School, and led him to be named manager of worldwide drilling. After a number of years as the company's senior technical officer, he elected to retire early to focus on writing. THE SIMPLE TRUTH, narrative nonfiction, is Turley's debut publication. Others will follow.