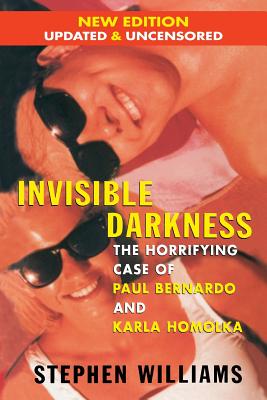 By Stephen Williams
$24.95
Email or call for price.

2014 NEW TRADE PAPERBACK EDITION - REVISED NEW LAST CHAPTER ENTITLED "ENDGAMES" "'Invisible Darkness' is a masterfully written, forensically researched, minutely detailed work of true crime. As time goes by, it should be viewed as a classic of the genre." George Elliott Clarke, Governor General Award winning poet and professor of Enblish at the University of Toronto. Paul and Karla were the perfect picture of love and youth - and they were the essence of pure evil Invisible Darkness is not only a must read for anyone interested in law and disorder, crime and punishment: a riveting page-turner, it is the tragic story of love gone mad. Together, the Ken-and-Barbie killers kidnapped, raped and murdered three teenage schoolgirls, beginning with Karla's own sister. Expertly drawn, the book rises far above the average true crime tale, chronicling the couple's descent from love and marriage to rape and murder. It relies on voluminous research, police notebooks, medical and psychiatric records, inaccessible court documents and in-depth interviews. The author details the unbelievable series of coincidences and police and forensic lab blunders that allowed Paul and Karla to elude detection for six years. If only Bernardo's DNA had been tested when he was first questioned as a suspect in a series of brutal rapes committed in and around the Toronto suburb where he then lived, he would have been caught before he had a chance to move to a small town minutes away from Niagara Falls and marry Karla Homolka. Together they looked to be the embodiment of the American dream: Young, well to do beautiful and in love. But the front door of their quaint pink Cape Cod -style house on the shore of Lake Ontario was a Gate to Hell. It was there they drugged and raped a half-dozen teenage girls while meticulously making videotaped records of the attacks. Everything was documented including their storybook wedding; the horse and buggy ride through picturesque Niagara-on-the-Lake to their reception and sit-down dinner for a 100 at the posh Queen's Landing Hotel as well as virtually everything they did behind their closed door. In the case of 14-year-old Leslie Mahaffy they not only kidnapped, tortured and raped her, they killed and dismembered her in the basement, encased the body parts in homemade cement castings and dumped them in a local reservoir. In one of those unholy coincidences, as they exchanged vows the police were dragging the lake. A year later they kidnapped Kristen French in broad daylight while she walked home from school on Easter weekend . Before they went to Karla's parents for Sunday dinner, Karla decided that Kristen had to die. Later, they dumped her naked body on the side road next to the cemetery where Leslie was buried. The storybook wedding turned into a nightmare. Finally, the Toronto police matched Bernardo's DNA to three rape victim's in Toronto. Bernardo is now rotting away in a maximum-security prison whereas Karla has remarried and has three small children. It has to read to be believed. WHAT THE REVIEWERS SAID ABOUT INVISIBLE DARKNESS: "By far the most intelligent and subversive of the Bernardo triptych." Lynn Crosbie "Williams has performed a remarkable, if unconventional, feat in the annals of true crime" Judge Lynn King "I found Invisible Darkness a superior example of a dying breed - the straight, un-hyped, literate work of true-crime." Jack Olsen, Edgar-Award winning author of SON and DOC "You may think you've heard enough but you haven't heard the half of it. It's a must read Based on court documents....as well as countless interviews with police, lawyers, psychiatrists and friends of Paul and Karla, it is well-researched and thought-provoking." Bart Johnson "This book lets it all hang out....You can't help but be drawn in by this tale of sex, death, lies and videotape...." Helen Dolik.