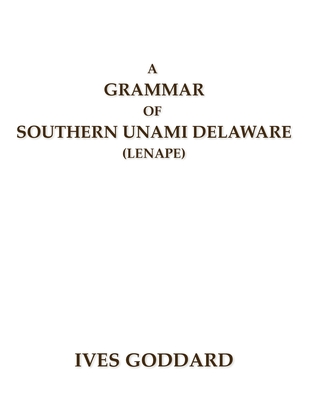 By Ives Goddard
This item is not available.
Usually arrives at our store within 4-7 days

A Grammar of the Southern Unami Dialect of the Delaware Language (Lenape):

This grammar of the Southern Unami language describes the phonology, the inflectional and

derivational morphology, and some aspects of sentence and discourse structure. It does not

Morphology (Goddard 1979) has been entirely recast, and there are now sections on additional

Algonquian language. The facts are presented discursively in small modules with examples.

the long and short fricatives between vowels and after /n/, and by greater consistency in writing

the marginally distinctive contrast between /u/ and the unrounded mid-central vowel, especially

The extensive phonological alternations are illustrated with examples of morphological

contexts in which they characteristically appear. Static words, syllables, and segments (which

have short phonemes inconsistent with the more usual phonological patterns) are treated. The

inflection of nouns, pronouns, and verbs is described and illustrated with extensive paradigms,

and particles, including enclitics, are treated.

(those derived from another stem). The types of reduplication are described. Several kinds of

compounds are distinguished and illustrated.

The basic facts of sentence structure are presented, including the function of absolute and

complements and adjuncts. Other features discussed include verbless sentences, participles

Southern Unami is the heritage language of the Delaware Tribe of Indians (Bartlesville,

Okla.) and the Delaware Nation of Western Oklahoma (Anadarko).