Hang on and Fly: A Post-War Story of Plane Crash Tragedies, Heroism, and Survival (Hardcover) 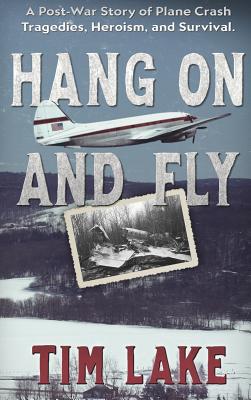 Passenger planes are crashing three and four times a month in 1951 just as Americans are beginning to fly. Then, a loaded plane disappears in the night and can't be found. Panic and frustration reach all the way to the White House.

Twenty-six are killed in the most spectacular crash that no one heard on a mountain frosted with snow and fog. Fourteen survivors are the largest group of plane crash victims to be lost and stranded in North America. The stewardess holds a baby in her arms until it dies. They huddle beneath a parachute tent, arguing over food and how to get out. One commits a dastardly criminal act upon the dead. When rescuers don't arrive after 40 hours, a hero passenger stumbles out of the snow-filled woods to find help from a farmer's wife with a secret deadly threat of her own.

Distracted by blazing headlines, crash tourists, and a federal probe, simple farm families are intertwined with urban crash survivors leading up to more tragedy on the plane crash mountain.

Hang on and Fly is a dramatic tale of the most incredible year of aviation disasters that made Americans plane crash jumpy. Passengers in rope seatbelts are eaten by sharks; a pilot with heart disease flies into a hill; three crashes close a major airport; a lost pilot mistakes Lake Ontario for the Atlantic. It's the origin of our belief that we're safest in the back of the plane. It's the beginning of modern plane crash investigations, inspired Hollywood's airplane disaster movie genre, and caused safety regulations we all take for granted today. Journalist Tim Lake tells the gripping story of America's first budget airlines as only he can. His family was there.