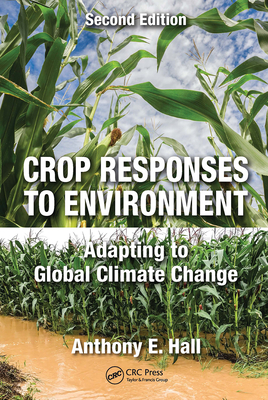 Following in the tradition of its predecessor, Crop Responses to Environment, this fully updated and more comprehensive second edition describes aspects of crop responses to environment that are particularly relevant to the development of improved crop cultivars and management methods on a global scale. It includes an extensive discussion of the difficulties in developing agricultural systems that accommodate increasing human needs for agricultural products during the twenty-first century in a sustainable manner. The book features new sections on adaptation to global climate change including adapting to global warming, elevated atmospheric carbon dioxide concentration, and increased flooding and salinity through plant breeding and changes in crop management. Warming effects include stressful effects of heat on pollen development and reduced winter chilling effects on fruit and nut trees.

The book examines principles, theories, mathematical models, and experimental observations concerning plant responses to environment that are relevant to the development of improved crop cultivars and management methods. It illustrates the importance of considering emergent plant properties as well as reductionist approaches to understanding plant function and adaptation. Plant physiological and developmental responses to light and temperature, and plant water relations are considered in detail.

Dr. Hall also describes climatic zone definitions based on temperature, rainfall, and evaporative demand in relation to plant adaptation and the prediction of crop water use. Irrigation management and crop responses to salinity, flooding and toxic levels of boron and aluminum are considered. Crop responses to pests and diseases as they interact with crop responses to physical and chemical aspects of the environment are examined. The book concludes with analyses illustrating the relevance of crop responses to environment to plant breeding.

Anthony E. Hall is an Emeritus Professor at the University of California, Riverside. Since his retirement in 2003 he has been active serving as an advisor to various agencies of the United Nations and to two Foundations, co-edited a book on Crop Adaptation to Climate Change (2011), co-wrote a technical journal article (2004), wrote seven review articles (2004 to 2013), and collaborated in the release of one cowpea variety in California and two cowpea varieties in Ghana. Prior to his retirement, Professor Hall served for thirty-two years as a Professor of Plant Physiology at the University of California, Riverside writing or co-writing 173 scientific journal articles, chapters and reviews, and co-editing 4 books. During each of these years he taught an advanced undergraduate class in Crop Ecology and a graduate class in Crop Responses to Environment. He also had a joint appointment as a Crop Ecologist in the California Agricultural Experiment Station. His research emphasized breeding improved varieties of cowpea and developing complementary crop management methods for irrigated production by farmers in California. At the same time he collaborated with scientists from Senegal, Sudan and Ghana developing improved cowpea varieties and management methods for rain-fed production in semi-arid zones of Africa. This collaborative program is described in a book he wrote on Sahelian Droughts: A Partial Agronomic Solution that was published in 2017. Overall he collaborated in breeding two cowpea varieties for California, two cowpea varieties for Senegal, one cowpea variety for Sudan and two cowpea varieties for Ghana. Professor Hall has practical experience in agriculture and a broad education. After high school he worked for three years with his father on the family farm in England. Then over a three-year period he obtained National Diplomas in Agriculture and Agricultural Engineering from Harper Adams Agricultural College and the Essex Institute of Agriculture in England. After this he served for 28 months as an Agricultural Extension Officer in Tanzania in East Africa. He then came to the University of California, Davis where he obtained a B.S. (Honors) in Irrigation Science and a Ph.D. in Plant Physiology. He then was hired by the University of California, Riverside. Professor Hall is a Fellow of the Crop Sciences Society of America and the American Society of Agronomy (both awarded in 1993). In 2000 he received the USAID/BIFAD Chair's Award for Scientific Excellence for his outstanding research on plant responses to environmental stresses and plant breeding, and advising and collaborating with African scientists; thus contributing significantly to the development and extension of cowpea varieties that have provided millions of poor people with more food. In 2001 he received the USDA Secretary's Honor Award For breeding disease-resistant and early-flowering varieties of black-eyed pea (cowpea) that have become reliable sources of nutritious food in drought-ridden West Africa.