Species Problems and Beyond: Contemporary Issues in Philosophy and Practice (Species and Systematics) (Paperback) 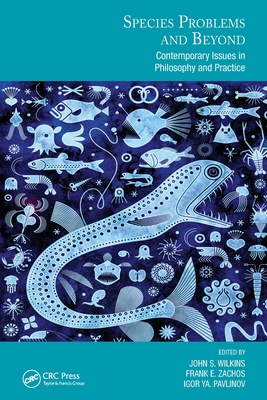 Species Problems and Beyond offers a collection of up-to-date essays discussing from an interdisciplinary perspective the many ramifications of the 'Species Problem.' The authors represent experts in the philosophy of biology, in species-level evolutionary investigations, and in biodiversity studies and conservation. Some of the topics addressed concern the context sensitivity of the term 'species'; species as individuals, processes, natural kinds, or as 'operative concepts'; species delimitation in the age of Big (genomic) Data; and taxonomic inflation and its consequences for conservation strategies. The carefully edited volume will be an invaluable resource for philosophers of biology and evolutionary biologists alike.

Species, or 'the Species Problem', is a topic in science, in the philosophy of science, and in general philosophy. In fact, it encompasses many aspects of the same problem, and these are dealt with in this volume. Species are often thought of as fundamental units of biological matter to be used in ecology, conservation, classification, and biodiversity. The chapters in this book present opposing views on the current philosophical and conceptual issues of the Species Problem in biology.

Divided into four sections, Concepts and Theories, Practice and Methods, Ranks and Trees and Names, and Metaphysics and Epistemologies, the book is authored by biologists, philosophers, and historians, many leaders in their fields. Topics include ontology of species, definitions of both species category and units, species rank, speciation issues, nomenclature, ecology, and species conservation.

Species Problems and Beyond aims to clarify the contemporary issues of the Species Problem. It is ideal for use in upper-level seminars and courses in Evolutionary Biology, Philosophy of Science, Philosophy of Biology, Systematics and Taxonomy, and Phylogenetics/Cladistics, and for any scholar in these fields.

John Wilkins did his PhD at the University of Melbourne. He has since researched and taught at the University of Queensland, the University of Sydney, the University of New South Wales, and the University of Melbourne. He has published several books: Species: A History of the Idea (2009) and its successor Species: The Evolution of the Idea (2018), Defining Species (2009), The Nature of Classification (2013, with Malte C. Ebach), and edited Intelligent Design and Religion as a Natural Phenomenon (2010). John is currently Subject Coordinator at the University of Melbourne School of Historical and Philosophical Studies, where he has previously been a research fellow. His interests include species conceptions (obviously), the history of biology, philosophy and sociology of religion, phenomena, evolution, taxonomy and Terry Pratchett's oeuvre. He has not published on the last listed.Frank E. Zachos is Head of the Mammal Collection at the Natural History Museum in Vienna, Austria, and an affiliated Professor at the Department of Genetics, University of the Free State, Bloemfontein, South Africa. His interests include molecular and morphological approaches in microevolutionary studies on mammals, with a taxonomic focus on ungulates, particularly cervids, and birds of prey. He carries out research in the fields of population genetics, molecular (mostly intraspecific) systematics and phylogeography, developmental homeostasis and fluctuating asymmetry as well as conservation genetics and the Quaternary distribution history of mammals and birds. His theoretical interests comprise species concepts, the foundations of taxonomy and systematics and the history and theory of (evolutionary) biology.Igor Ya. Pavlinov was, until his retirement in 2018, leading researcher and the chief of the Mammal Division at the Zoological Museum at the Lomonosov Moscow State University. His DrS dissertation was Cladistic approach in phylogenetics and taxonomy: theoretical foundations of evolutionary cladistics (1997). He is still affiliated with the Zoological Museum, where he is a curator of mammals. His principal research interests are in theoretical taxonomy and phylogenetics, systematics of mammals (mainly rodents), morphometrics.