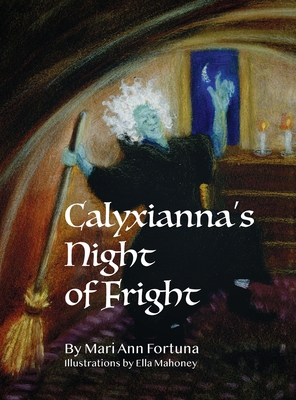 "Calyxianna's Night of Fright" is a tale of a wicked witch named Calyxianna, who lives on the top of a lonely hill with her only companion, a faithful little black bat. Calyxianna has become embittered over the years after being cast out from a coven of good witches. Seeking revenge, she begins to hatch an evil plot which she plans to put into motion on the All Hallows Eve exactly 1,000 years later. This terrible plot aims to kill all the sleeping innocent children of the little town at the base of her hill. But the tree spirits of the nearby Fortuna Forest surrounding Calyxianna's house - and the children's parents, with the aid of a ringing bell in the old monk's tower in the town square - unite to thwart the impending threat. Calyxianna is enraged and retreats to her house and her beloved cauldron followed by the little bat. There is much crashing and howling and the fuming Calyxianna disappears to...where? Only her legend remains.