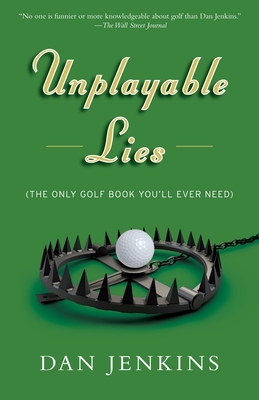 In Unplayable Lies, Dan Jenkins takes us on a tour of the links as only he can do it. Here, Dan delves into the greatest rounds of golf he's ever seen, the funniest things said on a golf course, the rivalries on tour and in the press box, the game's most magical moments—and its most absurd. Filled with well-known characters like Tiger Woods, to others like Titanic Thompson—gambler, golf hustler, accused murderer, legendary storyteller—Unplayable Lies is an ode to the game of golf and the people who play it. But it is Dan Jenkins, so nothing—even the game itself—can escape his wrath, his critical eye, or his acerbic pen. This is Dan Jenkins at his best, writing about the sport he loves the most.

Dan Jenkins is one of America's most acclaimed sportswriters as well as a bestselling novelist. A native Texan, he has spent a lifetime at the typewriter and computer. He might best be known for his twenty-four years of stories in Sports Illustrated and now Golf Digest. Three of his bestselling novels, Semi-Tough, Dead Solid Perfect, and Baja Oklahoma, were made into movies. His sportswriting has won him many awards. In 2012 he was inducted into the World Golf Hall of Fame—one of only three writers to be honored thus far—and was given the PEN Lifetime Achievement Award for Literary Sports Writing. He is also the 2013 winner of the Red Smith Award, the highest honor in his profession.

"No one is funnier or more knowledgeable about golf than Dan Jenkins."--Wall Street Journal

"Jenkins is hilarious, providing more laughs per page than any other writer in the 'bidness.'"—People

"Jenkins takes us inside the world of golf like no one else."--Sacramento Bee

Dan Jenkins has been among America's best and funniest sportswriters for more than six decades."--The New York Times