The Dreamt Land: Chasing Water and Dust Across California (Paperback) 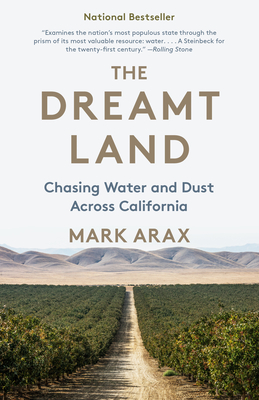 A vivid, searching journey into California's capture of water and soil—the epic story of a people's defiance of nature and the wonders, and ruin, it has wrought

Mark Arax is from a family of Central Valley farmers, a writer with deep ties to the land who has watched the battles over water intensify even as California lurches from drought to flood and back again. In The Dreamt Land, he travels the state to explore the one-of-a-kind distribution system, built in the 1940s, '50s and '60s, that is straining to keep up with California's relentless growth.

The Dreamt Land weaves reportage, history and memoir to confront the "Golden State" myth in riveting fashion. No other chronicler of the West has so deeply delved into the empires of agriculture that drink so much of the water. The nation's biggest farmers—the nut king, grape king and citrus queen—tell their story here for the first time.

Arax, the native son, is persistent and tough as he treks from desert to delta, mountain to valley. What he finds is hard earned, awe-inspiring, tragic and revelatory. In the end, his compassion for the land becomes an elegy to the dream that created California and now threatens to undo it.

MARK ARAX is an author and journalist whose writings on California and the West have received numerous awards for literary nonfiction. A former staffer at the Los Angeles Times, his work has appeared in The New York Times and the California Sunday Magazine. His books include a memoir of his father's murder, a collection of essays about the West, and the best-selling The King of California, which won a California Book Award, the William Saroyan Prize from Stanford University, and was named a top book of 2004 by the Los Angeles Times and the San Francisco Chronicle. He lives in Fresno, California.


“[An] exhaustive, deeply reported account. . . . Few other journalists could have written a book as personal and authoritative. . . . As Arax makes plain in this important book, it's been the same story in California for almost two centuries now: When it comes to water, ‘the resource is finite. The greed isn't.’” —Gary Krist, The New York Times Book Review

“There’s a new history of water use in California that’s fantastic. It’s called The Dreamt Land. It’s like John McPhee-level writing. It’s really worth it for the writing alone.” —Linda Ronstadt

“A mesmerizing new book that examines the nation’s most populous state through the prism of its most valuable resource: water. Call author Mark Arax, an award-winning journalist, historian and native son of the Central Valley, a Steinbeck for the 21st century.” —Andy Kroll, Rolling Stone

“The Dreamt Land is Arax’s grand history of California water, beginning before Spanish arrival and following the trail of man-made decisions that exacerbate the present. . . . Everyone can go back to pretending the land has been tamed as the fields and orchards once again expand. The Dreamt Land leaves us with the question: When the next dry spell comes, will we have gone too far?” —Gregory Barber, Wired

“Compelling and widely appealing. . . . Part of the genius of Arax’s book is how it juxtaposes California’s settlement history with today’s conflicts. The Dreamt Land shows that California’s water war is a long game in which formidable players have staked their ground and simply wait for the right combination of opportunity and luck to press their advantage.” —Ann Willis, California Water Blog

"Arax narrates this tumultuous history skillfully. . . . Water, land and the conjunction of the two have inspired some of California’s most powerful writing: Didion, Mary Austin’s lyrical The Land of Little Rain, Norris Hundley’s authoritative The Great Thirst, William Kahrl’s gorgeous, shamefully out-of-print The California Water Atlas, and, jumping genres, Chinatown, with its water-crazed Mephistopheles, Noah Cross. The Dreamt Land earns its place alongside them.” —Peter Fish, The San Francisco Chronicle

“In his sprawling, provocative book The Dreamt Land, journalist Mark Arax examines California's long-building water crisis with the keen, loving, troubled eye of a native son. . . . The Dreamt Land assumes an urgent, personal tone and incorporates history, memoir and the lives of larger-than-life personalities. Taken together, it is a story biblical in scope and cautionary in tenor." —Gerard Helferich, The Wall Street Journal

“Former L.A. Times reporter Mark Arax makes a riveting case that this expanse—450 miles lengthwise from Shasta to Tehachapi; 60 miles across from the Sierra Nevada to the Coastal Range—as much as the world cities on its coast, holds the key to understanding California . . . a deeply reported work keenly alive to local subcultures.” —Stephen Phillips, Los Angeles Times

“A writer of rare patience. . . . The Dreamt Land is Arax’s grand history of California water.”
—Wired

“Sprawling. . . . Impressive: [Arax] describes the cultivation of specialized grapes with the same clarity and finesse with which he unravels the state’s great mass of dams, aqueducts and complicated water rights. . . . The California Dream is the American Dream with a dash of rouge and citrus—just as tantalizing, just as exclusive. Arax throws back the curtains, but a deeper question endures: Does his audience rise and respond, or do they remain asleep?” —Sean McCoy, High Country News

“Mark Arax’s monumental new book on California’s water system underscores the madness that makes the Golden State an agricultural powerhouse. [The Dreamt Land] is a compelling and powerful history of how power and greed shape the land, and Arax has achieved a masterful distillation of how California got here, warts and all.” —Civil Eats

“This book is a challenge to all of us to start thinking about the state’s future, both the people and the land, the politics and the cultures, the dreamers and the workers.” —Trudy Wischemann, The Sun-Gazette

“The Dreamt Land weaves reportage, history and memoir to confront the “Golden State” myth in riveting fashion. No other chronicler of the West has so deeply delved into the empires of agriculture that drink so much of the water. The nation’s biggest farmers–the nut king, grape king and citrus queen–tell their story here for the first time.” —Chicago Review of Books

"You can't understand California without understanding water, and no one is better at doing that than Mark Arax, whose depth of knowledge about the Central Valley is organic and unparalleled. Plus, he writes like a dream." —Mark Bittman, author of Food Matters

"The Dreamt Land is the book Mark Arax was born to write. Nuanced, deeply researched, and profoundly personal, it offers, through its history of agriculture in California, a deep dive into the soul of the state. Arax knows the territory; he has written about rural California for many years. This is his crowning achievement, a work of reportage that is also a work of literature. It belongs on the short list of great books about the state.” —David L. Ulin, author of Sidewalking: Coming to Terms with Los Angeles, and editor of The Library of America’s Collected Didion

“This is a stunning book. Biblical drama played against the harsh sun and earth of California’s Central Valley. Exodus, diaspora, parting the waters, sowing and reaping, Godlike dominion: it’s all in here.  The Dreamt Land calls up Steinbeck and Didion, but it rests squarely on its own words, memories, and stories beyond mere comparison.” —William Francis Deverell, Director of Huntington-USC Institute on California and the West

“California's relationship to water is defined by such contradictions and complexities, as evidenced by this brilliant work from Arax. . . . Arax's combination of research with memoir gives it the necessary lift and motion to make it compelling, brutal, and consistently hard to put down. "We have run out of tricks, or at least the easy ones," writes Arax at one point of the problem. It is a painful honesty for us to confront, which makes the issue all the more important for readers everywhere to consider. VERDICT: A stunning and uncompromising look at California's man-made water crisis in the context of its complex history of agricultural growth. Highly recommended for those interested in environmental issues and journalistic nonfiction.” —Library Journal (starred)

“A sweeping, engrossing history of his native California focused on the state's use, overuse, and shocking mismanagement of water. . . . Arax reveals the consequences to land and wildlife of generations of landowners who have defiantly dug, dammed, and diverted California's waters.” —Kirkus Reviews (starred)

“Arax brings a reporter’s precision of language, a researcher’s depth of perception, and a born storyteller’s voice to this empathetic but unsentimental look at the history, present, and uncertain future of a once-arid region restructured into one of the country’s most productive.” —Publishers Weekly