The Districts: Stories of Crime and Justice from the Federal Courts (Paperback) 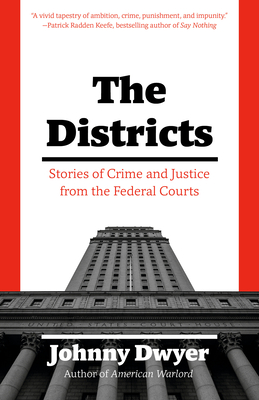 Johnny Dwyer examines the New York crimes we’ve seen in the news, in movies, and on television—drug trafficking, organized crime, terrorism, corruption, and white-collar crime—while weaving in the nuances that rarely make it into headlines.

“Told in the kind of pointillist detail that can only come from years of hanging around the courthouse and doing old-school shoe-leather reporting.” —Patrick Radden Keefe, author of Say Nothing

The Rosenbergs, Rudy Giuliani, Bernie Madoff, James Comey, John Gotti, Preet Bharara, and El Chapo are just a few of the figures to have appeared before the courts in the Southern and Eastern District of New York—the two federal courts tasked with maintaining order in New York City. These two epicenters of power in our justice system have become proving grounds for ambitious prosecutors who turn their service in government into power, position, and, in some cases, celebrity. These attorneys don’t hope for victory in court; they expect it.

In The Districts, Johnny Dwyer takes us not just into the courtrooms but also into the lives of the judges and defendants, prosecutors and defense counsels, and winners and losers who people the courts.

An unprecedented look at New York City’s federal court system that exposes the incentives driving how America chooses to punish crime—and what those choices reveal about our politics and our society—The Districts paints a revelatory picture of how our justice system, and the pursuit of justice, really works.

Johnny Dwyer is a reporter living in New York City and the author of American Warlord. He has written for The New York Times, Esquire, The Intercept, Rolling Stone, and other publications. He teaches at New York University’s Arthur L. Carter Journalism Institute. www.johnnydwyer.net

“If the courtroom is a theater, then The Districts is a backstage tour. In this magisterial anatomy of our criminal justice system, Johnny Dwyer punctures the dispassionate edifice of the institutions that administer criminal law to reveal the rousing and often messy human drama behind them. In a series of unforgettable stories about the lawyers, litigants and judges who face off in our federal courts, told in the kind of pointillist detail that can only come from years of hanging around the courthouse and doing old-school shoe-leather reporting, Dwyer presents a vivid tapestry of ambition, crime, punishment, and impunity.” —Patrick Radden Keefe, author of Say Nothing

"Illuminating. . . . Dwyer skillfully explains complex federal statutes, such as the Foreign Intelligence Surveillance Act, and traces shifting definitions of what constitutes criminal conduct in insider trading cases. Ultimately, he leaves it up to readers to decide whether justice is being served, but his balanced, sympathetic account demystifies and humanizes the criminal justice system." ⁠—Publishers Weekly