A History of the Theatre Costume Business: Creators of Character (Paperback) 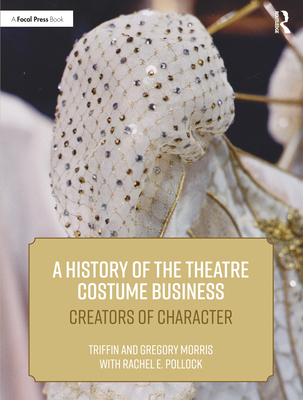 A History of the Theatre Costume Business is the first-ever comprehensive book on the subject, as related by award-winning actors and designers, and first hand by the drapers, tailors, and craftspeople who make the clothes that dazzle on stage.

Readers will learn why stage clothes are made today, by whom, and how. They will also learn how today's shops and ateliers arose from the shops and makers who founded the business. This never-before-told story shows that there is as much drama behind the scenes as there is in the performance: famous actors relate their intimate experiences in the fitting room, the glories of gorgeous costumes, and the mortification when things go wrong, while the costume makers explain how famous shows were created with toil, tears, and sweat, and sometimes even a little blood. This is history told by the people who were present at the creation - some of whom are no longer around to tell their own story.

Based on original research and first-hand reporting, A History of the Theatre Costume Business is written for theatre professionals: actors, directors, producers, costume makers, and designers. It is also an excellent resource for all theatregoers who have marveled at the gorgeous dresses and fanciful costumes that create the magic on stage, as well as for the next generation of drapers and designers.

Triffin I. Morris is head of the graduate costume production program at the University of North Carolina at Chapel Hill, Milly S. Barranger Distinguished Professor of the Practice, and costume director of PlayMakers Repertory Company. She has worked at Radio City Music Hall, Tricorne, Eric Winterling, the Metropolitan Opera, and many others, making costumes for Broadway shows, opera, and dance over a 20-year career. She worked on Harry Potter and the Cursed Child, Margaritaville, The Rockettes, Beautiful: The Carole King Musical, Wicked, Cinderella, Matilda, and Shrek among many others. She has worked with such designers as William Ivey Long, Paul Tazewell, Ann Roth, Jane Greenwood, Gregg Barnes, and Emelio Sosa.Gregory DL Morris has 35 years' experience as a business journalist and historian, having reported from all 50 states, eight Canadian provinces, and 17 countries on five continents. He earned a BS in Journalism and Education, with a distinction in all subjects, from Cornell University. He is a second-generation native New Yorker, a member of the Overseas Press Club, and sits on the Editorial Board of the Museum of American Financial History, a Smithsonian Affiliate.Rachel E. Pollock is costume crafts artisan and lecturer at the University of North Carolina at Chapel Hill. She was resident lead crafts artisan and dyer for the American Repertory Theatre at Harvard University, then worked in Los Angeles on film, television, and opera. She has served as a crafts artisan, dyer, and milliner for such designers as Catherine Zuber, Ann Hould-Ward, Ilona Somogyi, David Zinn, Constance Hoffman, and Julie Taymor. She has also worked as a dyer and first hand at the Broadway production house Parsons-Meares, Ltd. on shows such as Hamilton, Lion King, and Frozen.