Rain of the Ghosts (Paperback) 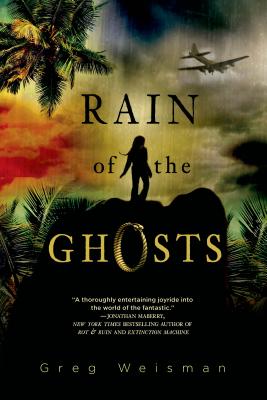 By Greg Weisman
This item is not available.
Out of Print

Rain of the Ghosts is the first in Greg Weisman's series about an adventurous young girl, Rain Cacique, who discovers she has a mystery to solve, a mission to complete and, oh, yes, the ability to see ghosts.

Welcome to the Prospero Keys (or as the locals call them: the Ghost Keys), a beautiful chain of tropical islands on the edge of the Bermuda Triangle. Rain Cacique is water-skiing with her two best friends Charlie and Miranda when Rain sees her father waiting for her at the dock. Sebastian Bohique, her maternal grandfather, has passed away. He was the only person who ever made Rain feel special. The only one who believed she could do something important with her life. The only thing she has left to remember him by is the armband he used to wear: two gold snakes intertwined, clasping each other's tails in their mouths. Only the armband . . . and the gift it brings: Rain can see dead people. Starting with the Dark Man: a ghost determined to reveal the Ghost Keys' hidden world of mystery and mysticism, intrigue and adventure.

GREG WEISMAN is an American comic book and animation writer and producer, best known as the creator of Gargoyles and as the Supervising Producer of The Spectacular Spider-Man. Weisman just completed work as writer and producer on the Young Justice animated series. The television series he's produced have been nominated for a number of Emmy Awards. He's currently the Executive Producer of Disney's forthcoming Star Wars: Rebels.

“From his work on DC's cartoon Young Justice to his first novel, Rain of the Ghosts, he hits it out of the park every time!” —Danica McKellar, actress and New York Times bestselling author Math Doesn't Suck

“The perfect book for the young adult reader.” —Stan Lee

“All of the excitement and hyperbole of teen emotion is captured in this quick-moving debut.” —Shannon Delany, author of the 13 to Life Series

“A superb builder of new worlds and their rules of magick.” —Nicole Dubuc