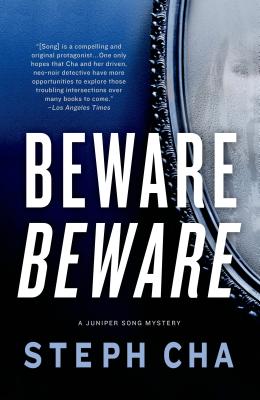 By Steph Cha
This item is not available.
Out of Print

This is book number 2 in the Juniper Song Mysteries series.

Working as an apprentice at a P.I. firm, Juniper Song finds herself nose deep in a Hollywood murder scandal where the lies may be more glamorous than most, but the truths they cover are just as ugly. When a young woman named Daphne Freamon calls looking for an eye on her boyfriend, her boss punts the client to Song. Daphne is an independently wealthy painter living in New York, and her boyfriend Jamie Landon is a freelance screenwriter in Los Angeles, ghostwriting a vanity project for aging movie star Joe Tilley. Song quickly learns that there's more to this case than a simple tail, and her suspicions are confirmed when Tilley winds up dead in a hotel room. Nonetheless, when Jamie becomes the prime suspect in the movie star's murder, she agrees to help the charismatic couple discover the truth, even as the police build their case against Jamie. As she chases leads and questions grieving Hollywood insiders, she uncovers a sordid layer of blackmail and hidden identities, of a history of violence that leaves no one—not even Song—safe from judgment.

An edgy, gorgeously written read, Beware Beware is perfect for fans of Megan Abbott and Tana French. It's a tale that twists around the lies we tell ourselves and others, that examines the ugliness under the skin-deep glamor of L.A.

"[Song] is a compelling and original protagonist… One only hopes that Cha and her driven, neo-noir detective have more opportunities to explore those troubling intersections over many books to come." –LA Times

"Engrossing… Steph Cha's intriguing debut Follow Her Home works as a testament to the power of storytelling and a cautionary tale against forsaking reality for fiction…Cha elevates Follow Her Home with glimpses at the culture of Korean-American families." –Oline Cogdill, Tulsa World

"Stephanie Cha's brilliant debut is as Noir as Old Nick's sense of humour. Compelling from first to last page, she takes on contemporary L.A., sweeping the reader through Chandler's twilight, heartbroken city from mansions to faux K-town hostess bars. L.A. Noir at its finest." -- Denise Mina, author of The Dead Hour

STEPH CHA is the author of Follow Her Home, Beware Beware, and Dead Soon Enough. Her writing has appeared in The L.A. Times, The L.A. Review of Books, and Trop Magazine. A graduate of Stanford University and Yale Law School, she lives in her native city of Los Angeles, California.

“Before this cautionary tale is over, secrets will be revealed, lies within lies told, more people injured or killed and Song's core values compromised in ways that will have psychological reverberations for years, and books, to come. Nathanael West and Raymond Chandler would be proud.” —LA Times

“In her second outing, Korean Song defies the stereotype of the Asian American woman, working to overcome her background and what she suffered in Cha's debut, Follow Her Home (2013), and facing a formidable moral dilemma in the process. This is prime L.A. noir with a feminist slant.” —Booklist

“In what is a great sequel to Follow Her Home, Cha's prose is more developed and her plot more creative… In adrenalin-fueled prose, Juniper solves the latent mystery behind Tilley's demise, but closure leaves a bitter taste in her mouth. In the process, she becomes much darker, more reflective, more cynical and ruthless. Cha lays down a slippery slope of lying, deceit and brutality, the pain of the past balanced against Juniper's resilience in the face of death.” —CurledUp.com