The Tattooed Soldier: A Novel (Paperback) 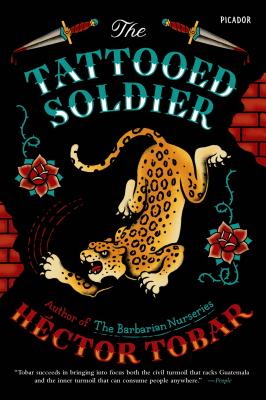 Antonio Bernal is a Guatemalan refugee in Los Angeles haunted by memories of his wife and child, who were murdered at the hands of a man marked with yellow ink. In a park near Antonio's apartment, Guillermo Longoria extends his arm and reveals a sinister tattoo—yellow pelt, black spots, red mouth. It is the sign of the death squad, the Jaguar Battalion of the Guatemalan army.

This chance encounter between Antonio and his family's killer ignites a psychological showdown between these two men. Each will discover that the war in Central America has migrated with them as they are engulfed by the quemazones—"the great burning" of the Los Angeles riots. A tragic tale of loss and destiny in the underbelly of an American city, The Tattooed Soldier is Pulitzer Prize–winning reporter Héctor Tobar's mesmerizing exploration of violence and the marks it leaves upon us.

Héctor Tobar is a Pulitzer Prize–winning journalist and novelist. He is the author of the critically acclaimed, New York Times bestseller, Deep Down Dark, as well as The Barbarian Nurseries, Translation Nation, and The Tattooed Soldier. Héctor is also a contributing writer for the New York Times opinion pages and an associate professor at the University of California, Irvine. He's written for The New Yorker, The Los Angeles Times and other publications. His short fiction has appeared in Best American Short Stories, L.A. Noir, Zyzzyva, and Slate. The son of Guatemalan immigrants, he is a native of Los Angeles, where he lives with his family.

“Tobar succeeds in bringing into focus both the civil turmoil that racks Guatemala and the inner turmoil that can consume people anywhere.” —People

“Suspenseful...Tobar has a fine storyteller's instinct and moves his characters towards the climax with the skill of a chess master.” —Los Angeles Times

“[The Tattooed Soldier] casts a subtle light on the Third World terror which lies behind the faces of people on the pavements and in the parks of Los Angeles....Dazzling.” —Thomas Keneally

“Héctor Tobar's accomplished first novel affords a perspective that is overdue and urgently needed in North American literature--an insider's vision of L.A. as a Third World city. The Tattooed Soldier is a riveting book that manages to be at once politically informed and at the same time a psychologically astute study of that most elemental of stories: revenge.” —Stuart Dybek