Magicians of the Gods: Updated and Expanded Edition - Sequel to the International Bestseller Fingerprints of the Gods (Paperback) 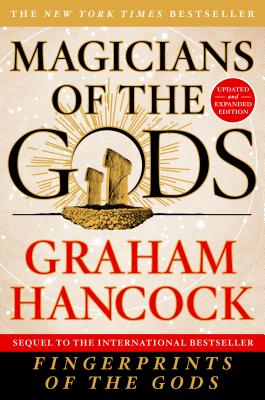 With over 5 million copies sold worldwide of Fingerprints of the Gods, its New York Times bestselling sequel Magicians of the Gods brings new evidence supporting Hancock's thesis that a global cataclysm wiped out a great global civilization.

On the heels of the very successful hardcover edition, Hancock returns with this paperback version including three new chapters brimming with recent reporting of fresh scientific advances (ranging from DNA to astrophysics) that substantially support his case.

Twenty years ago, Graham Hancock published Fingerprints of the Gods an astonishing, deeply controversial investigation of the mysteries of and the evidence for Earth's lost prehistoric civilization. Twenty years after this massive bestseller debuted, Hancock returns with its sequel, filled with completely new scientific and archaeological evidence.

Since 2007, a host of new proof has come to light supporting his theories through new archaeological discoveries. He travels to a wholly different set of ancient sites, including Gobekli Tepe, and brings entirely up to date and exciting material to the table for fans eagerly awaiting more evidence in favor of the prehistoric civilization. And, even more intriguing, he proposes an answer to the one question he could not answer in Fingerprints what caused this civilization to disappear. Magicians is poised perfectly for what his fans want to hear as well as for ushering in a new generation of readers.

GRAHAM HANCOCK is the author of the major international non-fiction bestsellers including The Sign and the Seal and Fingerprints of the Gods. His books have sold more than seven million copies worldwide and have been translated into thirty languages. His public lectures, radio and TV appearances, including TV series, Quest For The Lost Civilization and Flooded Kingdoms of the Ice Age, as well as his strong presence on the internet, have put his ideas before audiences of tens of millions. He resides in the UK.

"I'm deeply immersed still in Hancock's "Magicians of the Gods." I do so recommend this book. Hancock is an enchanting writer, and such a curious and thoughtful and intuitive investigator of the mysteries of lost civilizations and archaeological mysteries." - Anne Rice, NYT bestselling author of The Vampire Diaries

"Author Graham Hancock's new book Magicians of the Gods is a triumph of investigation, intuition and interpretation. Deeply immersed in an ocean of new scientific and archaeological discoveries and yet prescient enough to conceive of humanity's mysterious development and humble place in the universe, Hancock weaves a multidisciplinary thread that connects oral traditions, the mystery of place and time with contemporary scientific observations and evidence....A masterpiece of penitentiary distillation, intuitive speculation and multidisciplinary perspective, Magicians of the Gods comes with the highest recommendation." - New Dawn on Magicians of the Gods

“Ingenious.” —Kirkus Reviews on Magicians of the Gods

"Magicians of the Gods schools the attentive reader in exotic locales and colourful (often thwarted) characters, dusty ancient knowledge and pristine contemporary science and theory. Hancock's passionate, detailed prose transports us around the globe and across millennia in an accessible and direct manner.: - New Dawn on Magicians of the Gods

"Hancock does a magnificent job of proving beyond reasonable doubt that an advanced civilization, which flourished during the Ice Age, was destroyed in global cataclysms between 12,800 and 11,600 years ago." —Atlantis Rising on Magicians of the Gods

“Intriguing and entertaining and sturdy enough to give a long pause for thought.” —Kirkus Reviews on Fingerprints of the Gods

"I do so recommend this book. Hancock is an enchanting writer, and such a curious and thoughtful and intuitive investigator of the mysteries." - Anne Rice, author of Interview with a Vampire