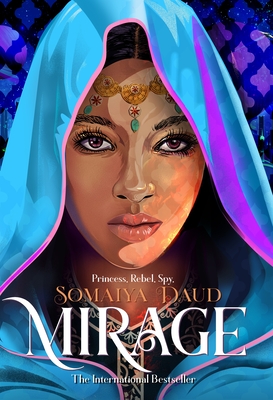 This is book number 1 in the Mirage Series series.

“Amani is stolen from her home on the moon of Cadiz and forced to serve as the princess's double for the heartless Vathek, usurpers of her people. With her life at stake, Amani must now learn how to think and act like her enemies while trying to keep true to her own people's outlawed customs and beliefs — and to herself. Whereas some young women might become depressed and lose hope in the face of such a loss of control, Amani boldly embraces her new circumstances with a rare surety; she waits, and she plans. The narration is poetic, the worldbuilding beautifully crafted. This Moroccan-influenced fusion of fantasy and science fiction is a positively stunning debut novel.”
— Leah Atlee, Changing Hands, Tempe, AZ

“Somaiya Daud’s debut novel is a YA marvel that will shock breath into your lungs. If you loved The Wrath and the Dawn and Children of Blood and Bone, Mirage will captivate you.” —The Christian Science Monitor

In a world dominated by the brutal Vathek empire, eighteen-year-old Amani is a dreamer. She dreams of what life was like before the occupation; she dreams of writing poetry like the old-world poems she adores; she dreams of receiving a sign from Dihya that one day, she, too, will have adventure, and travel beyond her isolated home.

But when adventure comes for Amani, it is not what she expects: she is kidnapped by the regime and taken in secret to the royal palace, where she discovers that she is nearly identical to the cruel half-Vathek Princess Maram. The princess is so hated by her conquered people that she requires a body double, someone to appear in public as Maram, ready to die in her place.

As Amani is forced into her new role, she can’t help but enjoy the palace’s beauty—and her time with the princess’ fiancé, Idris. But the glitter of the royal court belies a world of violence and fear. If Amani ever wishes to see her family again, she must play the princess to perfection...because one wrong move could lead to her death.

“A beautiful and necessary meditation on finding strength in one’s culture.” —Entertainment Weekly, Top Pick of the Month

Somaiya Daud is the author of Mirage and holds a PhD from the University of Washington in English literature. A former bookseller in the children’s department at Politics and Prose in Washington, D.C., now she writes and teaches full time.

“Superb...a refreshing and unique coming-of-age story. The way Amani uses her heritage to facilitate her survival makes Mirage a beautiful and necessary meditation on finding strength in one’s culture.” —Entertainment Weekly, Top Pick of the Month

“Daud’s debut novel has the flair of an Arthurian drama, the lavish sensory detail of a Nizar Qabbani poem, and the sleek technical flair of a sci-fi series...this audacious combination is so skillfully done that it’ll shock breath into your lungs. If you loved The Wrath and the Dawn and Children of Blood and Bone, Mirage will captivate you.” —The Christian Science Monitor

“This poetically written novel will appeal to many, particularly fans of Cinder by Marissa Meyer and An Ember in the Ashes by Sabaa Tahir. Verdict: This debut novel has what it takes to be the next big thing in sci-fi/fantasy.” —School Library Journal, starred review

“This gorgeously written, immersive, and captivating series starter is sure to have fans eager for a sequel.” —ALA Booklist, starred review

“Prepare yourself for a story that’s enriching, thrilling, and captivating.” —BuzzFeed

“Mirage is smart, sexy, and devilishly clever. Somaiya Daud has penned a tale worthy of all the stars in the sky, and I can't wait to read what she writes next.” —Renée Ahdieh, author of The Wrath and the Dawn

“Daud is a masterful storyteller. Mirage gives readers an exquisitely wrought world with deft characters, death-defying stakes, and an aching romance. Bound to linger in your dreams.” —Roshani Choksi, author of The Star-Touched Queen

“Somaiya Daud’s Mirage reads like the lushest of fantasies, set in an unforgettably immersive world that is both dangerous and impossibly lovely. The characters are complex and nuanced, and the story is by turns romantic, harrowing, climactic and hopeful, though the unresolved ending paves the way for an even grander sequel. I didn’t want it to end, and I can't wait to return to the world Daud has created.” —Rosalyn Eves, author of Blood Rose Rebellion

“Mirage is full of my favorite things: secrets, intrigue, gorgeous mythology, and complicated characters. It will break your heart and fill you with hope.” —Kat Howard, author of An Unkindness of Magicians

“A rich, dazzling, powerful debut. Somaiya Daud is an author to watch.” —Tahereh Mafi, author of the Shatter Me series

“Lush and dangerous, Mirage had me entranced. Amani’s journey—from rural innocent to calculating young woman, from village girl to royal impersonator—is galactic. Daud’s novel asks, ‘what does it mean to impersonate your enemy?’ And the answer she provides here is nothing short of thrilling. I was here for all of it, and I desperately need to know what happens next.” —Tochi Onyebuchi, author of Beasts Made of Night

“Mirage is full of characters who feel like they existed long before the story began, and a rich world that is as beautiful as it is cruel. Somaiya Daud is a rare talent. A smart, romantic, exciting debut.” —Veronica Roth, author of Divergent and Carve the Mark

“Mirage reads as an impossible trick of the light, a feather that carves words into stone, a banquet of longing and loss. Every page comes roaring to life in a way that overwhelms and transforms you. This isn’t a debut novel so much as an heirloom, and the work of a master storyteller.” —Margaret Stohl, coauthor of Beautiful Creatures and author of Black Widow: Forever Red

“Mirage had me enthralled from its first page to its last. It’s a heart-wrenching, romantic, and exhilarating page-turner. Begin preparing yourselves for it now. Somaiya Daud is a brilliant writer and she has written a brilliant book.” —Courtney Summers, author of Sadie

“With its breathtaking worldbuilding and characters who grabbed me from the first page, Mirage is by turns thrilling and ruminative, sexy and heartbreaking. Somaiya Daud has written a moving and unforgettable debut.” —Sabaa Tahir, author of An Ember in the Ashes