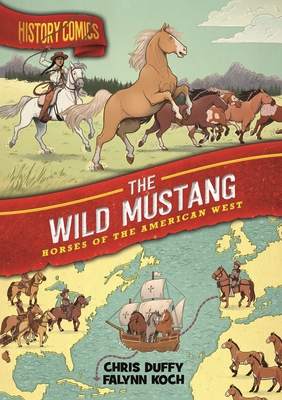 By Chris Duffy, Falynn Koch (Illustrator)
$12.99
On Our Shelves Now

Turn back the clock with History Comics, First Second's new nonfiction graphic novel series! In this volume, learn how wild mustangs were first introduced to America and how they still roam free today.

On the North American plains, wild mustangs have roamed for generations . . . shaping human history and struggling to survive it. For the Spanish, they were a tool of conquest. For Native Americans, they brought on a new way of life where horsemanship and horse-trading were central. And for the entire world, wild mustangs became a renowned wonder of the American West. There are still thousands of mustangs in the wild today, but they struggle to survive in an ever-changing landscape and their future is by no means guaranteed.

Chris Duffy has written many comic books, for Marvel and DC Comics, and has edited comics and graphic novels for Nickelodeon Magazine, United Plankton Pictures, DC Comics, and First Second, where he edited the New York Times best-seller Fairy Tale Comics. He currently is a senior editor at Workman Publishing, and lives in Cold Spring, New York, where he has seen a number of horses, but hasn't managed to ride one yet.

Falynn Koch was born and raised in Buffalo, New York. She has an MFA in sequential art from the Savannah College of Art and Design in Atlanta, and is a graduate of the International Culinary Center in New York City. She loves travel and exploring the outdoors with her husband and occasionally her dogs. Her other books from First Second include Science Comics: Bats, Science Comics: Plagues, Maker Comics: Bake Like a Pro!, and History Comics: The Wild Mustangs (with writer Chris Duffy).