The Spaces Between Us (Hardcover) 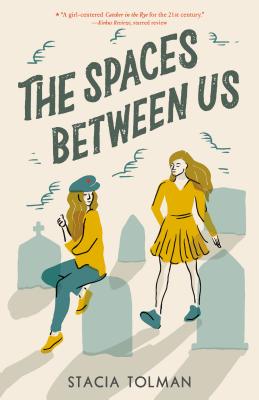 By Stacia Tolman
$17.99
Usually arrives at our store within 4-7 days

"A girl-centered Catcher in the Rye for the 21st century. "—Kirkus Reviews, starred review

Two outcast best friends are desperate to survive senior year and break away from their dying factory town in Stacia Tolman's The Spaces Between Us, an unforgettable YA debut.

Serena Velasco and her best (and only) friend, Melody Grimshaw, are dying to get out of Colchis. Until now they’ve both been coasting, keeping a safe distance from the bleakness of home and the banality of high school. To make things more interesting Serena fixates on communism, eager to get a rise out of their conservative small town. Her Western Civ teacher catches on and challenges her with an independent study of class and upward mobility—what creates the spaces between us. Meanwhile, Grimshaw takes on a mission of her own: to make it onto the cheerleading squad, find a job, and escape the weight of her family’s hopeless reputation.

But sometimes the biggest obstacles are the ones you don’t see coming; Grimshaw’s quest for success becomes a fight for survival, and Serena’s independent study gets a little too real. With the future of their friendship and their lives on the line, the stakes have never been so high.

Stacia Tolman is a writer and freelance editor whose work has appeared in the Keen Sentinel and the Massachusetts Review, among other publications. She won a New Hampshire State Council on the Arts grant for fiction, based on an early excerpt of The Spaces Between Us. A former high school English teacher, Stacia lives in New Hampshire.

"Serena is a stunningly realistic and layered protagonist. Her story unfolds in remarkably sharp, vivid prose, and even the least sympathetic characters are rendered with thoughtful complexity. A girl-centered Catcher in the Rye for the 21st century. "—Kirkus Reviews, starred review

"Beautiful prose emphasizes complex themes of faith, the class system, and personal responsibility. With its impeccably developed characters and hard-hitting narrative, this is an essential purchase for teen and new adult collections."—School Library Journal, starred review

"Readers will be drawn by the plot details of high school life, a desperate road trip, and a tragic ending, while thematic wisdom comes in single lines. . . creating lingering questions and yielding insights that will have readers seeing their own situations differently long after the last page."—The Bulletin

"This is a raw, atmospheric depiction of a complicated relationship. The story unflinchingly faces hard questions about class and friendship, even when the answers are difficult, uncomfortable, or even tragic."—Horn Book

"One of the best parts of the story is its sense of place, which is writ large. Small, broken towns don't get a lot of attention in youth books, but Tolman digs deep, exploring the people who live there, their nightmares as well as their dreams."—Booklist