Enduring Vietnam: An American Generation and Its War (Paperback) 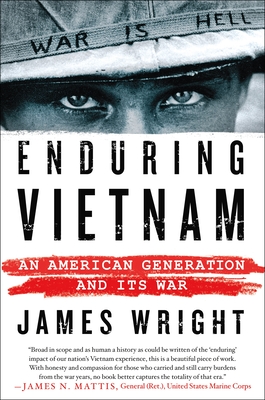 A history of the American War in Vietnam that provides a rich overview of that war and an evocative reminder of the human faces of the generation who served.

The Vietnam War is largely recalled as a mistake, either in the decision to engage there or in the nature of the engagement. Or both. Veterans of the war remain largely anonymous figures, accomplices in the mistake. Critically recounting the steps that led to the war, this book does not excuse the mistakes, but it brings those who served out of the shadows.

Enduring Vietnam recounts the experiences of the young Americans who fought in Vietnam and of families who grieved those who did not return. By 1969 nearly half of the junior enlisted men who died in Vietnam were draftees. And their median age was 21—among the non-draftees it was only 20. The book describes the “baby boomers” growing up in the 1950s, why they went into the military, what they thought of the war, and what it was like to serve in “Nam.” And to come home. With a rich narrative of the Battle for “Hamburger Hill,” and through substantial interviews with those who served, the book depicts the cruelty of this war, and its quiet acts of courage.

JAMES WRIGHT is President Emeritus and Eleazar Wheelock Professor of History Emeritus at Dartmouth College. He is the author or editor of several books, including Enduring Vietnam. A Marine Corps veteran from the era right before the Vietnam War, his efforts on behalf of veterans have earned him commendations from the Secretary of the Army, the Commandant of the Marine Corps, and the Veterans of Foreign Wars. He and his wife Susan live in Hanover, NH.

"There's something utterly revealing about the Vietnam War, something that speaks directly to the divisions we experience today. With Jim Wright's new book, we take a giant step closer to unlocking the mystery, and gain, at the same time, the intimate consequences of the conflict many of us would rather forget." —Ken Burns

“Broad in scope and as human a history as could be written of the “enduring” impact of our nation’s Vietnam experience, this is a beautiful piece of work. Richly informative and uncompromising, Jim Wright captures the tone of those tumultuous years, unflinchingly acknowledging the mistakes, courage and long-lasting effects on America through the lens of a generation that came of age in the sixties. With honesty and compassion for those who carried and still carry burdens from the war years, no book better captures the totality of that era." —James N. Mattis, General (ret.) United States Marine Corps

"This clear, concise, and highly readable book is a must read for anybody who wants to understand the Vietnam War, its politics, critical decisions, effects on individuals who lived through it, and its reverberations in current American culture and foreign policy. It provides the reader with a greater understanding of the nature of war and personal experiences of those who served, and a feeling for the times usually only found in a novel. It is destined to become a standard reference for the history of the Vietnam War. This is a great book." —Karl Marlantes, author of Matterhorn. Vietnam veteran

“Jim Wright’s history of the Vietnam War captures the voices of the combat veterans who bore the brunt of their leaders’ mistakes in the Vietnam War. His pitch perfect account of what those men experienced reminds us again of so many lives lost too soon, of wounds both physical and psychological, of the losses that last for lifetimes, all for a cause that was never clear or compelling. Enduring Vietnam is an important addition to the literature of the Vietnam War." —Peter S. Prichard, retired editor, USA Today, Chairman, Newseum. Vietnam veteran

"James Wright’s Enduring Vietnam offers an intimate, moving, sometimes heartbreaking account of Americans who fought in Vietnam, focusing on 1969, a time when combat was still at a peak of intensity but when a majority of citizens—including many GIs—had turned against the war. Wright takes us from the harrowing bloodbath of Hamburger Hill to the troubled homecomings of veterans and never reduces the human complexity of his subject with sentimentality or broad brush polemics." —Christian Appy, author of Patriots: The Vietnam War Remembered from All Sides

"The best books about conflict and combat weave into their narrative personal stories, vignettes that plumb the human landscape of war. James Wright has written one of those best books. Anyone who wants a glimpse into the psyche of the Vietnam combat veteran should – must – read Enduring Vietnam." —Bernard Edelman, editor of Dear America: Letters Home from Vietnam. Vietnam veteran

“This important investigation of the Vietnam War and its effects on an entire generation will appeal to both Vietnam-era specialists and general readers.” —Library Journal (starred review)

“There have been hundreds of books written about the Vietnam War, but this is among the most powerful and heartbreaking.” —Booklist

“Wright’s worthy effort is a tribute to Americans who saw the worst that the Vietnam War offered, combined with a broad look at the domestic and geopolitical factors that led to the U.S. getting involved in the long, controversial conflict.” —Publishers Weekly