The End of the Myth: From the Frontier to the Border Wall in the Mind of America (Paperback) 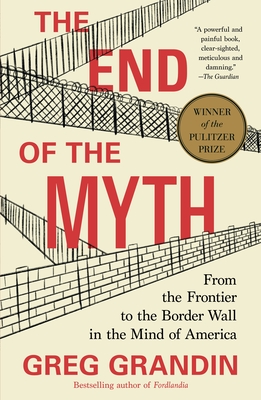 WINNER OF THE PULITZER PRIZE

A new and eye-opening interpretation of the meaning of the frontier, from early westward expansion to Trump’s border wall.

Ever since this nation’s inception, the idea of an open and ever-expanding frontier has been central to American identity. Symbolizing a future of endless promise, it was the foundation of the United States’ belief in itself as an exceptional nation – democratic, individualistic, forward-looking. Today, though, America hasa new symbol: the border wall.

In The End of the Myth, acclaimed historian Greg Grandin explores the meaning of the frontier throughout the full sweep of U.S. history – from the American Revolution to the War of 1898, the New Deal to the election of 2016. For centuries, he shows, America’s constant expansion – fighting wars and opening markets – served as a “gate of escape,” helping to deflect domestic political and economic conflicts outward. But this deflection meant that the country’s problems, from racism to inequality, were never confronted directly. And now, the combined catastrophe of the 2008 financial meltdown and our unwinnable wars in the Middle East have slammed this gate shut, bringing political passions that had long been directed elsewhere back home.

It is this new reality, Grandin says, that explains the rise of reactionary populism and racist nationalism, the extreme anger and polarization that catapulted Trump to the presidency. The border wall may or may not be built, but it will survive as a rallying point, an allegorical tombstone marking the end of American exceptionalism.

Greg Grandin is the author of The End of the Myth, which won the Pulitzer Prize, and Fordlandia, a finalist for the Pulitzer Prize, the National Book Award, and the National Book Critics Circle Award. His widely acclaimed books also include The Last Colonial Massacre, Kissinger's Shadow, and The Empire of Necessity, which won the Bancroft and Beveridge awards in American history. He is Peter V. and C. Van Woodward Professor of History at Yale University.

WINNER OF THE 2020 PULITZER PRIZE FOR NONFICTION

LONGLISTED FOR THE 2019 NATIONAL BOOK AWARD FOR NONFICTION

“An essential, sweeping history of the American frontier, its end and what it has meant to our nation’s sense of itself.”
—Los Angeles Times

“The End of the Myth aims, in part, to reposition race-based violence to the center of the frontier narrative [and] situate today’s calls to fortify our borders in relation to the centuries of racial animus that preceded them... A vital corrective to popular conceptions.”
—The New Yorker

"As bracing an analysis of post-2016 America as any I have read. Grandin’s book is so sharply argued, so rooted in careful historical detail, so morally clear, that it makes a strong claim to be the most essential political text yet to emerge from the shock of Trump’s election."
—Los Angeles Review of Books

“The End of the Myth kicks hard-packed certainties into dust as Grandin strides across three centuries... to supply rich new context to familiar events and pluck neglected ones from the shadows.”
—American Scholar

"Subtle but highly readable . . . Like any good historian-poet, Grandin creates spiritual through-lines that pull his readers inexorably along the path of America’s westward expansion, making us take responsibility for bloody events we may never have learned about but certainly should have."
—The Virginian-Pilot

“One of our most gifted writers and thinkers, Greg Grandin has given us a history of the United States like none other. It is a history written from our ever-shifting and expanding borders, a history of our quest to escape history, and a history of how that history has now caught up with us. The End of the Myth bubbles with ideas, insights, and challenges (and often with wry humor), offering essential perspective on our current condition.”
—Steven Hahn, author of A Nation Under Our Feet

“A great book. Brilliant, erudite, and above all else fresh, The End of Myth offers a genuinely new, compelling, and historically informed framework for understanding the madness of this political moment.”
—Chris Hayes, author of A Colony in a Nation

“Many historians have recounted the legend-encrusted saga of American expansionism. Written with insight, passion, and uncompromising moral clarity, The End of the Myth renders all prior interpretations obsolete. The Age of Trump needs history that is both bold and subversive. On both counts, Greg Grandin delivers.”
—Andrew J. Bacevich, author of Twilight of the American Century

“‘If you want to avoid civil war, you must become imperialists,’ Cecil Rhodes once said. The End of the Myth trenchantly relates how an American dream of expansion and growth managed to contain domestic disaffection, and reveals the perils of a shattered imperial fantasy. Describing the consequences of an exhausted imperialism, Grandin illuminates, like few have, our treacherous present. A tremendous book.”
—Pankaj Mishra, author of Age of Anger

“What happens when expansion is no longer viable as a promise for the nation’s future and as a fix for its problems? Greg Grandin’s analysis of our current political moment is historical, erudite, provocative, and beautifully written.”
—Mae Ngai, author of Impossible Subjects: Illegal Aliens and the Making of Modern America

“A compelling examination of the American history of frontiers, by one of the most innovative and imaginative historians in any field. Troubling but inspiring, this is intellectual history for a broad readership; its sweep and force are stunning. Grandin brilliantly gives our current conditions of aggression, nostalgia, and racism deep historical grounding for the benefit of all who will listen.”
—David W. Blight, author of Frederick Douglass: Prophet of Freedom

“This book is an extraordinarily incisive look at the myths that Americans have used to evade our real situation and the responsibilities we might have to one another as members of a democracy. It is also a rich, illuminating, and unsettling retelling of American history as the story of these evasions and the harm they have done—and the countercurrents we might still hope to draw on to build a deeper and better democracy.”
—Jedediah Purdy, author of After Nature: A Politics for the Anthropocene