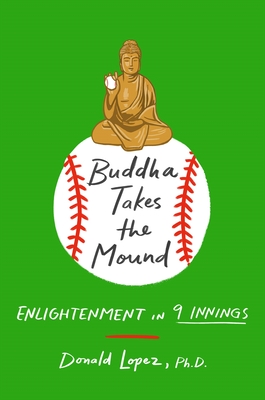 In 2010 a Buddhist scroll was found in the ruins of Yankee stadium, and it proved what Buddhist scholar/award-winning author Donald Lopez, Ph.D., had suspected: the Buddha created the game of baseball.

Buddha Takes the Mound: Enlightenment in 9 Innings is The Tao of Pooh for baseball. Funny, moving, and enlightening, this is a read that will engross, enrich, and charm any baseball fan.

At once a love letter to the sport and an engaging introduction to Buddhism, it shows how the Buddha invented baseball to teach us deep truths about the world, about ourselves, and about each other. Lopez believes that Buddhism provides a lens for us to see baseball in a new way, a way that makes us love the game even more, a way that makes us ponder profound questions about winning and losing, about who we are, about finitude and infinitude, about birth and death.

Donald S. Lopez, Jr., Ph.D., has been referred to as the only public intellectual in the field of Buddhist Studies. He has appeared on many television and radio stations, including ABC, NPR, BBC radio, and more. He has written for the Wall Street Journal, The New York Times, The Nation, and The Chronicle of Higher Education, and he has been quoted in countless publications, such as The New York Times Magazine, Newsweek, the Chicago Tribune, and The New Yorker, to name a few.

Donald is the author of Buddha Takes the Mound, The Scientific Buddha, and In Search of the Christian Buddha. He has also translated the Dalai Lama's Opening the Eye of New Awareness and edited influential scholarly works including The Princeton Dictionary of Buddhism and Critical Terms for the Study of Buddhism.

"Baseball has always been a spiritual force of nature in my life and Buddha Takes The Mound only confirms what I thought I knew." —Ron Darling, New York Times Bestselling author and Emmy Award winning baseball analyst

"Runs all the bases with aplomb." —Kirkus Reviews

"Lopez’s passion for baseball and Buddhism is palpable and contagious, resulting in an odd but earnest introduction to Buddhist teachings." —Publishers Weekly