Personal Effects: What Recovering the Dead Teaches Me About Caring for the Living (Hardcover) 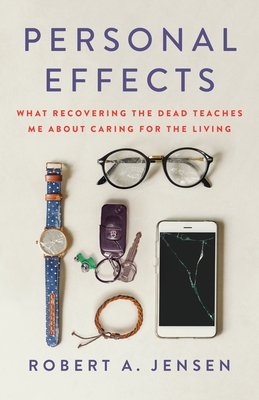 The owner of the world’s leading disaster management company chronicles the unseen world behind the yellow tape, and explores what it means to be human after a lifetime of caring for the dead.

You have seen Robert A. Jensen—you just never knew it. As the owner of the world’s largest disaster management company, he has spent most of his adult life responding to tragedy. From the Oklahoma City bombing, 9/11, and the Bali bombings, to the 2004 South Asian Tsunami, Hurricane Katrina, the 2010 Haitian Earthquake, and the Grenfell Tower Fire, Jensen has been at the practical level of international incidents, assisting with the recovery of bodies, identifying victims, and repatriating and returning their personal effects to the surviving family members. He is also, crucially, involved in the emotional recovery that comes after a disaster: helping guide the families, governments, and companies involved, telling them what to expect and managing the unmanageable. As he explains, “If journalists write the first rough draft of history, I put the punctuation on the past.”

Personal Effects is an unsparing, up-close look at the difficult work Jensen does behind the yellow tape and the lessons he learned there. The chronicle of an almost impossible and grim job, Personal Effects also tells Jensen’s own story—how he came to this line of work, how he manages the chaos that is his life, and the personal toll the repeated exposure to mass death brings, in becoming what GQ called “the best at the worst job in the world.”

A rare glimpse into a world we all see but many know nothing about, Personal Effects is an inspiring and heartwarming story of survival and the importance of moving forward, Jensen allows his readers to see over his shoulder as he responds to disaster sites, uncovers the deceased, and cares for families to show how a strong will and desire to do good can become a path through the worst the world can throw at us.

Robert A. Jensen is Chairman of Kenyon International Emergency Services, the global leader in crisis management and mass fatality response. He has spent most of his adult life responding to such events.

"Robert Jensen's revelations of recovering the dead create a gripping and page-turning experience, indeed. But what stood out to me was his deep concern, respect for and commitment to giving the proper tools to those left behind; the ones forced to pick up the pieces in their grief and cobble them together into a new life. By showing—and not merely telling—them that their loved ones will not be forgotten, he plays a role in alleviating their suffering, and teaches us all of the importance of doing the same." —Rebecca Soffer, coauthor of Modern Loss: Candid Conversation About Grief. Beginners Welcome.

"Gruesome details and corporate indifference abound as Jensen recounts disasters such as 9/11, Hurricane Katrina, the 2010 Haiti earthquake, and the Grenfell Tower fire in London . . . . Readers with a strong stomach will be fascinated by this up-close look at what it means to take charge of the response to an unspeakable tragedy." —Publishers Weekly

"Personal Effects is a moving and fascinating glimpse at what comes after the worst has happened . . . Ultimately Personal Effects offers reassurance: even after a mass tragedy causes the total breakdown of all the systems we take for granted, order and dignity are possible. A crucial read for anyone who dwells on worst case scenarios."
—Lauren Larson, features editor at Texas Monthly

"Robert Jensen delivers a powerful and riveting book of the toughest work a kind person can do. I could not stop reading until I finished every word, and then with tears streaming down my face, In the midst of the most horrible tragedies, there is one person you want to be there—Robert Jensen."
—Mary Schiavo, Former Inspector General of the US Department of Transportation and CNN Aviation/Transportation Analyst

"Jensen has lived a life few of could fathom, or frankly endure. And for this we should be grateful. Through his face to face encounters with unmeasurable carnage, we are taught the tenets of survival, perseverance, and compassion."
—Patrick Smith, bestselling author of Cockpit Confidential