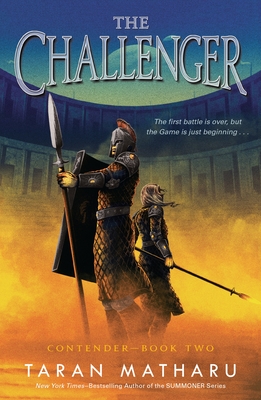 This is book number 2 in the Contender series.

The stakes are higher than ever in The Challenger, the second book in the Contender YA trilogy by the New York Times bestselling author of the Summoner series, Taran Matharu.

The first battle is over, but the Game is just beginning...

Cade Carter and his friends have survived the qualifying round of the mysterious overlords' twisted games, decimated by the loss of so many of their comrades during the fight. But they have no time to mourn, for the next round of trials is about to begin.

When the group discovers that their next foe will be even more ferocious than the last, Cade leads them on a quest out into their strange new world to find anything that might give them an edge. But what they find in the wilds could prove to be even more dangerous than the impending battle...

Readers will be on the edge of their seats in this thrilling sequel to The Chosen.

Taran Matharu is the author of the Contender trilogy and the New York Times–bestselling Summoner series: The Novice (Book One), The Inquisition (Book Two), The Battlemage (Book Three), The Outcast (the prequel), and The Summoner's Handbook; the series has been compared to the Harry Potter and Lord of the Rings series. Taran Matharu lives in London.

Praise for The Challenger:

"Matharu presents a unique world with fantasy, science fiction, and historical fiction elements. ... The action scenes are riveting and in perfect balance with the characterizations, as the diverse group of teens reacts realistically to the violence and horror around them. A complex, well-blended mix of plot and characterization, perfect for fans of fantasy battle royale stories." —School Library Journal

Praise for The Novice:

“This plot-focused fantasy adventure will be a satisfying read for a wide age range of readers, especially fans of role-playing games and Christopher Paolini.” —VOYA

“Taran Matharu . . . racked up more than a million reads for his first novel, Summoner, in only four months.” —NBCnews.com

Praise for The Inquisition:

Praise for The Battlemage: