The World of Robert Jordan's The Wheel of Time (Hardcover) 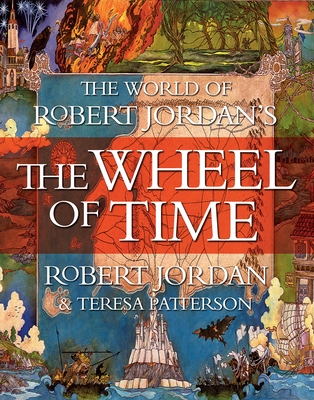 Since its debut in 1990, The Wheel of Time® by Robert Jordan has captivated millions of readers around the globe with its scope, originality, and compelling characters. The World of Robert Jordan's The Wheel of Time is bursting with full-color art, legends, and stories from the iconic series.

In this series companion book, over eighty full color paintings include maps of the world, portraits of the central characters, landscapes, objects of Power, and national flags. The reader will learn about the exotic beasts used by the Seanchan, witness the rise and fall of Artur Hawking, peruse the deeper story of the War of the Shadow, and discover the tale of the founding of the White Tower, and the creation of the Ajahs.

The inner workings of the closed country, Shara, are revealed, as is the existence of a hitherto unknown continent called The Land of the Madmen. This stunning volume also includes double-page spreads of the first seven book jackets by Darrell Sweet so that the art can be enjoyed without type, and all the known maps of the world, including maps of the Seanchan Empire, the nations of the Covenant of the Ten Nations, and the nations as they were when Artur Paendrag Tanreall began his rise to legend.

In a new hardcover edition with a beautiful updated cover, The World of Robert Jordan's The Wheel of Time is a must-buy for devoted fans of the series and newcomers alike.

“Anyone who’s writing epic or secondary world fantasy knows Robert Jordan isn’t just a part of the landscape, he’s a monolith within the landscape.” —Patrick Rothfuss, author of the Kingkiller Chronicle series

“You can't talk about epic fantasy without acknowledging the titanic influence Robert Jordan has had on the genre.” —Jason Denzel, author of Mystic and founder of Dragonmount.com