When Evil Lived in Laurel: The "White Knights" and the Murder of Vernon Dahmer (Paperback) 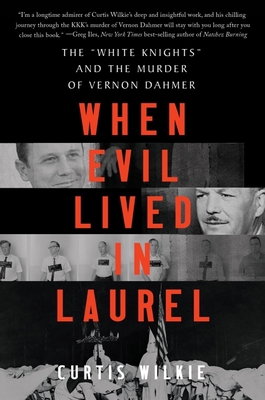 One of NPR's Best Books of the Year

Finalist for the 2022 Edgar Award for Best Fact Crime

The inside story of how a courageous FBI informant helped to bring down the KKK organization responsible for a brutal civil rights–era killing.

By early 1966, the work of Vernon Dahmer was well known in south Mississippi. A light-skinned Black man, he was a farmer, grocery store owner, and two-time president of the Forrest County chapter of the NAACP. He and Medgar Evers founded a youth NAACP chapter in Hattiesburg, and for years after Evers’s assassination Dahmer was the chief advocate for voting rights in a county where Black registration was shamelessly suppressed. This put Dahmer in the crosshairs of the White Knights, with headquarters in nearby Laurel. Already known as one of the most violent sects of the KKK in the South, the group carried out his murder in a raid that burned down his home and store.

A year before, Tom Landrum, a young, unassuming member of a family with deep Mississippi roots, joined the Klan to become an FBI informant. He penetrated the White Knights’ secret circles, recording almost daily journal entries. He risked his life, and the safety of his young family, to chronicle extensively the clandestine activities of the Klan. Veteran journalist Curtis Wilkie draws on his exclusive access to Landrum’s journals to re-create these events—the conversations, the incendiary nighttime meetings, the plans leading up to Dahmer’s murder and its erratic execution—culminating in the conviction and imprisonment of many of those responsible for Dahmer’s death.

In riveting detail, When Evil Lived in Laurel plumbs the nature and harrowing consequences of institutional racism, and brings fresh light to this chapter in the history of civil rights in the South—one with urgent implications for today.

Curtis Wilkie covered civil rights activity in Mississippi in the 1960s and afterward served as a national and international correspondent for a quarter century at the Boston Globe. He lives in Oxford, Mississippi.

Vivid.... [N]ow the virulent white supremacy that once coursed through Laurel has reached into the center of our embattled democracy. Maybe that evil will also be brought down and peace built on its ruins. Or maybe our current crisis should force us to see that the evil of the Knights had never really been broken at all.
— Kevin Boyle - Washington Post

When Evil Lived in Laurel is set during the civil rights movement of the 1960s, but its concerns could not be more central to our current moment: voting rights, white supremacist terror, and the ground-level mechanisms of white radicalization. With meticulous research and all the tools of a novelist, Curtis Wilkie chronicles the Klan-ordered murder of activist Vernon Dahmer, and Tom Landrum’s infiltration of the White Knights. Read this book if you want to understand how racist words and ideas turn into violent, murderous action.

— Patrick Phillips, author of Blood at the Root: A Racial Cleansing in America

I’m a longtime admirer of Curtis Wilkie’s deep and insightful work, and his chilling journey through the KKK’s murder of Vernon Dahmer will stay with you long after you close this book. This kind of violence is where tacit encouragement of extremists leads, and Wilkie shows you how.
— Greg Iles, New York Times bestselling author of Natchez Burning

Curtis Wilkie’s riveting account of the murder of Vernon Dahmer by the KKK is a window into the depths of racism and white supremacy. But it is also a beautifully written tale of courage and morality featuring a man with deep local roots that knew right from wrong. When Evil Lived in Laurel can help us understand the Civil Rights era in the South and also our country today.

When Evil Lived in Laurel is an extremely useful book, in addition to being impossible to put down. It’s about evil; terrible men doing terrible things to their fellow humans. But it’s also about convention and cowardice and hypocrisy and ignorance and public lies—and also about quiet heroism—all matters of vital concern to us in America at this very moment.

Though the frightful history of the struggle for civil rights in Mississippi is a familiar one, Curtis Wilkie’s account of the 1966 murder of Vernon Dahmer is astonishing. Drawing on voluminous, remarkable FBI documents, court records, congressional hearings, and interviews, Wilkie paints a compelling picture of the dogged pursuit of justice by law enforcement officials, heretofore untold acts of courage by ordinary citizens, and the involvement of the White Knights of the Ku Klux Klan—alternately pernicious and inept. When Evil Lived in Laurel may well be the finest book on the Civil Rights era.

Represents a landmark in the history of the Klan, how they operated in the Deep South, and the complex, often frustrating role of law enforcement. Most of all, When Evil Lived in Laurel demonstrates the continued impact of racial violence on the current political climate in America. Readers will find a wealth of historical detail in this engaging narrative.

A tension-filled account of an FBI informant’s efforts to bring a notoriously violent chapter of the Ku Klux Klan to justice in the 1960s....Wilkie vividly conveys the turmoil of the era and the high stakes of the mission. This real-life thriller is a worthy tribute to the courage of those who put everything on the line for civil rights.
— Publishers Weekly

[Wilkie] skillfully examines a case full of cloak-and-dagger intrigue: passwords, death threats, secret codes, clandestine meetings in wooded areas after dark, and well-maintained suspense about whether the White Knights would discover the spy in their midst. In different ways, [Tom] Landrum and [Vernon] Dahmer risked their lives to fight appalling injustices, and anyone looking for underappreciated civil rights heroes might profitably start with either man. A true-crime tale that offers a rare insider’s perspective on the KKK in its heyday in Mississippi.
— Kirkus