Where We Go From Here (Hardcover) 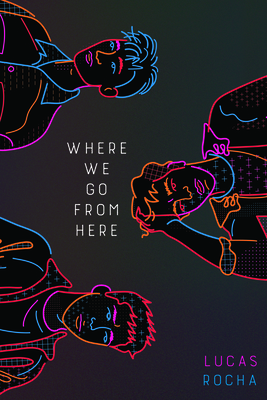 By Lucas Rocha, Larissa Helena (Translated by)
$18.99
On Our Shelves Now

An absorbing debut novel about three gay friends in Brazil whose lives become intertwined in the face of HIV, perfect for fans of Adam Silvera and Bill Konigsberg.
Ian has just been diagnosed with HIV.

Victor, to his great relief, has tested negative.

Henrique has been living with HIV for the past three years.

When Victor finds himself getting tested for HIV for the first time, he can't help but question his entire relationship with Henrique, the guy he has -- had -- been dating. See, Henrique didn't disclose his positive HIV status to Victor until after they had sex, and even though Henrique insisted on using every possible precaution, Victor is livid.

That's when Victor meets Ian, a guy who's also getting tested for HIV. But Ian's test comes back positive, and his world is about to change forever. Though Victor is loath to think about Henrique, he offers to put the two of them in touch, hoping that perhaps Henrique can help Ian navigate his new life. In the process, the lives of Ian, Victor, and Henrique will become intertwined in a story of friendship, love, and self-acceptance.

Set in Rio de Janeiro, Brazil, this utterly engrossing debut by Brazilian author Lucas Rocha calls back to Alex Sanchez's Rainbow Boys series, bringing attention to how far we've come with HIV, while shining a harsh light on just how far we have yet to go.

Lucas Rocha is a librarian living in São Paulo, Brazil. He received his MS in information science from Fluminense Federal University in Rio de Janeiro, Brazil. Where We Go From Here is his first novel.

"A powerfully honest book. Its raw and beautiful emotions will bring you to tears and leave you shouting with joy. A must-read." --Rachael Lippincott, New York Times bestelling author of Five Feet Apart

*"The challenges of being HIV-positive in a soecity where that is regarded with opprobrium are adroitly presented in this Brazilian import. . . . Despite its Brazil-specific setting, the story is universal. More important, it fills an urgent need: novels featuring young adults who are HIV-positive are virtually absent from American YA fiction. . . . this deserves the widest possible readership." --Michael Cart, Booklist starred review

"Effectively explores the tensions that stem from the prejudice and fear surrounding HIV." --Publishers Weekly