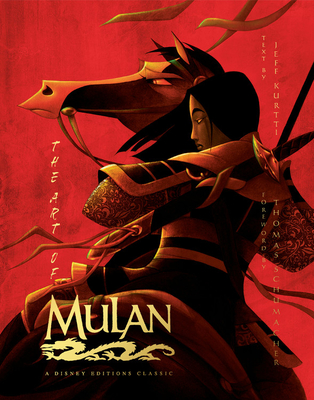 By Jeff Kurtti, Thomas Schumacher (Foreword by)
$50.00
Email or call for price.

A lovely reissue of the 1998 Disney Editions art and making of book offers a new generation of coffee table book fans an insider's view into the animated film process of Mulan.

The Art of Mulan was only Jeff Kurtti's fourth published work. He is honored to see this important and significant story in print again for new generations, along with some stunning additional visual development artwork and new foreword by Thomas Schumacher.

Mulan was the first animated feature film to be primarily produced by Disney's animation studio at Walt Disney World in Florida. This was a dazzling array of talented and dedicated filmmakers who specialized in traditional hand-drawn animation. With more than 350 illustrations, The Art of Mulan reveals the story behind the making of the film in this distinct place and time, both of which bridge the Disney animation renaissance of the 1990s and the sensibilities of today's Walt Disney Animation Studios.

A perfect gift for the Disney movie fan in your life!

JEFF KURTTI is a leading authority on The Walt Disney Company, its founder, and its history. He is the author of more than thirty books, a writer-director of award-winning documentary content, and a respected public speaker. A Seattle native, Kurtti worked as a production coordinator on the 1984 Los Angeles Olympic Arts Festival, followed by two years as the assistant to the president of the California Institute of the Arts (CalArts). For several years, he worked for Walt Disney Imagineering, the theme park design division of The Walt Disney Company, and then for the Corporate Special Projects department of Disney. Since 1995, Kurtti has enjoyed a career as an author, writer, and consultant in the motion picture, theater, and theme park entertainment industries. He was creative director, content consultant, and media producer for The Walt Disney Family Museum in San Francisco and a producer of The Boys: The Sherman Brothers Story, a critically acclaimed documentary about the famed songwriters.

PRAISE FOR PRACTICALLY POPPINS IN EVERY WAY

"This coffee table–worthy book by Jeff Kurtti is much more than a visually appealing celebration of the franchise."—<strong>Broadway Direct</strong>

PRAISE FOR THE ART OF DISNEY COSTUMING

PRAISE FOR THE ART OF MULAN"It details the movie's history and production and presents more than 350 beautifully produced illustrations that include early conceptual drawings and character designs, background paintings (many evocative of classic Chinese watercolors), and production stills. The text discusses the animators' visit to China to research the story's setting and the film's overall visual design, which stresses elements and simplifications that are common to both traditional Chinese art and effective animation. Any library possessing a shelf of the handsome volumes chronicling Disney's animation renaissance of the past decade shouldn't hesitate to add this one to it."—<strong>American Library Association <em>Booklist</em></strong>

PRAISE FOR THE ART OF DISNEY COSTUMING

"Explore the characters, stories, history, and currency of Disney in a whole new way. . . ."—<strong>Nerds and Beyond</strong>

PRAISE FOR PRACTICALLY POPPINS IN EVERY WAY

"Practically Poppins goes above and beyond the mandate of a movie tie-in to become a valuable book for any Mary Poppins fan."—<strong>Leonard Maltin</strong>, film critic and historian

PRAISE FOR TRAVELS WITH WALT DISNEY

PRAISE FOR THE ART OF MULAN"The Art of Mulan, by Jeff Kurtti, chronicles the production team’s research trip to China and the creative development of the pic, from concept art to production stills. Kurtti describes how the team broke new ground in creating certain shots, particularly the final crowd scenes that employ up to 10,000 hand-animated characters on screen at once. . . ."
—<strong><em>Variety</em></strong>