Undesigned Coincidences in the Writings Both of the Old and New Testament, an Argument of Their Veracity: With an Appendix, Containing Undesigned Coin (Paperback) 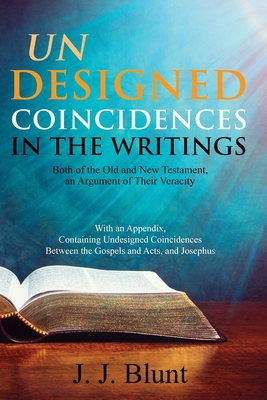 Undesigned Coincidences is part rhetorical and logical argument, and part exegetical analysis, useful to the biblical scholar. It is one of the first major texts seeking to validate the claims of the Bible using historical sources:

"I shall now enter more into detail and bring forward such speciﬁc coincidences amongst independent passages of the Mosaic writings, as tend to prove that in them we have the Word of Truth, that in them we may put our trust with faith unfeigned."

Written near the end of the period known as the Second Great Awakening, Blunt sought to strike a blow against the skepticism and deism that grew out of the various European revolutionary movements, while applying rational arguments and evidence to pious, Christian teachings. Undesigned Coincidences is a perfect addition for the modern Biblical scholar's library. Those interested in a history of pre-modern Christian faith will also enjoy it. The text opens a window to a world far different from today, while allowing the reader to strengthen their knowledge of the bible, and perhaps even their faith.