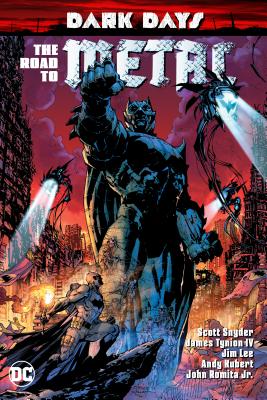 For years, Batman has been tracking a mystery. He's quietly been pulling a thread, conducting research in secret laboratories across the globe and stowing evidence deep in the Batcave, hidden even from his closest allies. Now, in an epic story spanning generations, the heroes and villains of the DC Universe, including Green Lantern, The Joker, Wonder Woman and more, are about to find out what he's discovered--and it could threaten the very existence of the Multiverse!

This edition collects Dark Days: The Forge #1 and Dark Days: The Casting #1, as well as classic DC stories that built the foundations of Metal, including Final Crisis #6-7, The Return of Bruce Wayne #1, Batman #38-39, Nightwing #17 and more!

Scott Snyder is a #1 New York Times best-selling writer and one of the most critically acclaimed scribes in all of comics. His works include ALL-STAR BATMAN, BATMAN, BATMAN: ETERNAL, SUPERMAN UNCHAINED, AMERICAN VAMPIRE and SWAMP THING. He has also been published in Zoetrope, Tin House, One-Story, Epoch, Small Spiral Notebook, and other journals, and has a short-story collection, Voodoo Heart, which was published by Dial Press. He teaches at Columbia University and Sarah Lawrence University and lives in New York with his wife, Jeanie, and his son, Jack Presley.

“It's impossible not to be excited for Metal after this.” —IGN

“Each prelude issue to DC’s new mega event is crazier than the one that came before.” —Nerdist

“If you’re going to do a explosive saga, then you better pack your biggest guns. Guns don’t get much bigger than Snyder, Lee, Romita, Jr, and Kubert.” —Comicosity