Full of Heart: My Story of Survival, Strength, and Spirit (Hardcover) 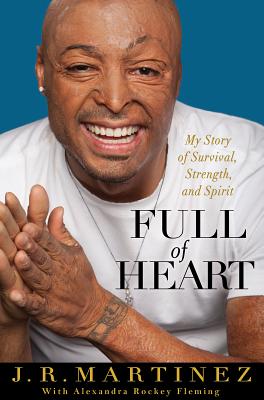 An inspirational journey from tragedy to triumph

In 2003, nineteen-year-old Private J.R. Martinez was on a routine patrol when the Humvee he was driving hit an antitank mine in Iraq, resulting in severe injuries and burns on his face and more than one-third of his body. Out of that tragedy came an improbable journey of inspiration, motivation, and dreams come true. In Full of Heart, Martinez shares his story in intimate detail, from his upbringing in the American South and his time in the Army to his recovery and the indomitable spirit that has made him an inspiration to countless fans.

J.R. Martinez always had a strong spirit. Raised in Bossier City, Louisiana, and then Hope, Arkansas, by a single mother from El Salvador, he was well known at school for his good looks and his smart mouth. At seventeen, showing an early determination and drive that would become one of his trademark qualities, J.R. convinced his mom to move to Dalton, Georgia, where he believed he would have a better chance of being recruited to play college football. His positive attitude earned him a spot on a competitive high school football squad, but when his college dreams collapsed, he turned to the U.S. Army. A few months later, he found himself serving in Iraq.

When J.R.'s humvee hit a mine and exploded -- just one month into his deployment—he was immediately evacuated to a San Antonio medical center, where he spent the next thirty-four months in grueling recovery. Seeing his disfigured face for the first time after the accident threw him into a crushing period of confusion and anger. His spirits were low, until he was asked to speak to another young burn victim. J.R. realized how valuable and gratifying it was to share his experiences with other patients and listen to theirs. He’d found a calling.

His fellow soldiers, along with the local and then national media, soon latched onto J.R.’s spirit and strength. His resilience, optimism, and charm were also noted by Hollywood and scored him roles on All My Children and Dancing with the Stars, where he was the season thirteen champion.

Today, J.R. tours the country sharing his story and his lessons for overcoming challenges and embracing hope, lessons that abound in this book. Full of Heart is an unforgettable story of a man who never gave up on his dreams.

After being injured in Iraq, J.R. Martinez became a motivational speaker, actor, and winner of season thirteen of Dancing with the Stars. Martinez lives in Los Angeles

After being injured in Iraq, J.R. Martinez became a motivational speaker, soap star, and winner of season thirteen of Dancing with the Stars. Martinez lives in LA.