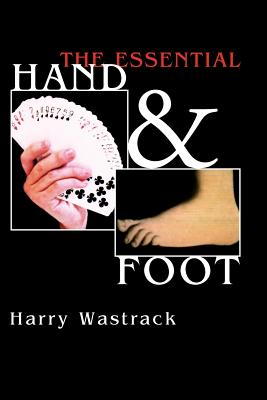 In the late 1940s and early 1950s, Canasta was all the rage. Fast forward forty years or so. Canasta is still played, though mostly by people who learned the game more than a generation ago. However, somewhere (I do not know exactly where) someone (I do not know exactly who) decided that Canasta needed to have new life breathed into it, thus this new variation called Hand & Foot. It only takes a quick practice hand to teach the gist of the game. Though it's similarities to Canasta are unmistakable, Hand & Foot is an edgier game that allows players to be more aggressive. Everyone has a strategy, some quite elaborate, others quite generic, but the caveat to each is "if the cards cooperate." The luck of the draw is a variable everyone has to take into account. Among Hand & Foot players there are often heard frustrated sighs and disgusted groans. There is also breathless anxiousness as players sweat out an opponent's turn hoping they will not go out before a "Foot" can be played or a red three can be discarded. Like a spirited game of Monopoly, Hand & Foot tends to bring out elements of personality heretofore unknown among its players, you know, sort of a playful viciousness. It only takes one round of Hand & Foot for a new player to recognize the objectives and basic strategies, .and the opportunities for deviousness. Also, while a veteran player who plays a solid game has a definite advantage, a novice can have fun and even prevail. It cannot be taken for granted that the best and most experienced player at the table will win a game of Hand & Foot. The cards do not always allow that. And there is that adrenaline rush that comes from just barely pulling out a win. It is probably that adrenaline rush that makes the game so addictive. This is why someone who has just played his first game of Hand & Foot will invariably insist on right away playing a second - he thinks he has figured it out. The Essential Hand & Foot for the first time codifies the rules of the game, holding to the common basics and incorporating the best of the regional variations. It also explains why some players consistently win more than others using such ploys as "priming the pump" and the "honey pot," and why picking a pile containing red threes can sometimes be a good thing. When was the last time you had a blast playing cards?