Out of Mao's Shadow: The Struggle for the Soul of a New China (Paperback) 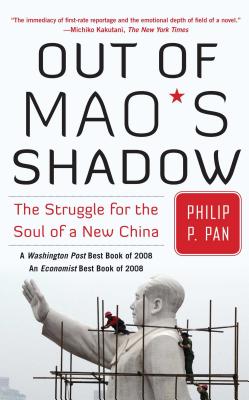 Now in paperback, an intimate, elegant account of a society in turmoil: the most important book in a generation about the Chinese people and their long, heartbreaking battle for political freedom.

Out of Mao’s Shadow offers a startling perspective on China and its remarkable transformation, challenging conventional wisdom about the political apathy of the Chinese people and the notion that prosperity leads automatically to freedom. Like David Remnick’s Lenin’s Tomb, this is a moving story of a nation in transition, of a people coming to terms with their past and struggling to take control of their future.

Philip P. Pan is a foreign correspondent for The Washington Post and the newspaper's former Beijing bureau chief. During his tour in China from 2000 to 2007 he won the Livingston Award for Young Journalists in international reporting, the Overseas Press Club's Bob Considine Award for best newspaper interpretation of international affairs, and the Asia Society's Osborn Elliott Prize for Excellence in Journalism on Asia. He is a graduate of Harvard College and studied Chinese at Peking University. He lives with his wife and son in New York and will begin a new assignment for the Post in Moscow in 2008.

"Phil Pan is one of the finest American correspondents to have worked in China, a penetrating reporter who works from the ground up. This is an extraordinarily important book about China's unfinished politics." -- Steve Coll, author of The Bin Ladens: An Arabian Family in the American Century

"Out of Mao's Shadow is a stunningly researched and crafted book, filled with tales of individual heroism, triumph, and heartbreak. Pan shares his subjects' relentless curiosity and drive to find truth; the result is a book that's immediate, moving, and ultimately thrilling." -- Rachel DeWoskin, author of Foreign Babes in Beijing: Behind the Scenes of a New China

"As correspondent for The Washington Post, Philip Pan covered China like no one else, using his fluency in the language to penetrate Chinese society. He goes beyond his newspaper reporting to tell the story of Chinese people pressing unsuccessfully for political change. Pan's book gives lie to the notion that China is inevitably heading toward democratization." -- James Mann, author of Rise of the Vulcans and The China Fantasy

"Philip Pan's book is a masterpiece of reportage, revealing the layers of dirt and pain that lurk just beneath the shiny surface of modern China." -- Rob Gifford, National Public Radio correspondent and author of China Road: A Journey into the Future of a Rising Power

"Philip Pan has brought great patience and a rare sensitivity to political reporting in China.This is the story of how power actually works there." -- Peter Hessler, author of Oracle Bones: A Journey Through Time in China