The God of War: A Novel (Paperback) 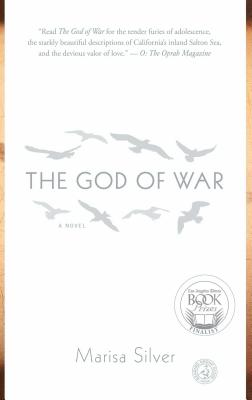 Twelve-year-old Ares Ramirez has a lot of responsibility on his plate as a major caretaker in the life of his younger brother Malcolm, who is mentally handicapped, and trying to live a normal life with his eccentric mother in their trailer by the Salton Sea. Set in the late 1970's after the end of the Vietnam War, but living in an area still being used by the military for weapons testing, Ares' life is full of contradictions and challenges; as he befriends a troubled teenage boy he gets in over his head, with disastrous results. The God of War is an excellent novel exploring the challenges of family and circumstance.

The year is 1978. Ares Ramirez, age 12, lives with his mother, Laurel, and his younger brother Malcolm in a trailer at the edge of the Salton Sea, an unintentionally man-made body of water in the middle of the Southern California desert. It is a desolate, forgotten place, whose inhabitants thrive amidst seemingly impossible circumstances.

Where birds fly by day across the desert sky, by night government fighter planes and helicopters make training runs using live ammunition, and an anonymous dead body floats in from the sea. These events inspire Ares, on the cusp of his adolescence, to enact elaborate fantasies of mortal combat. His membership in a troubled family marks Ares as a casualty of a different kind of war. Malcolm, age 7, is mentally handicapped, and his mother chooses not to do anything about it.

Ares' struggle with the burden of responsibility -- to himself and to others -- draws him into a world of drugs, violence, and sex that he is not prepared for, launching him into a very personal battle for his own identity, one that has a lethal outcome.

Marisa Silver is the author of the novel Little Nothing, published in September 2016. Her other novels include Mary Coin, a New York Times bestseller and winner of the Southern California Independent Bookseller’s Award. The God of War, which was a finalist for the Los Angeles Times Book Prize for Fiction, and No Direction Home. Her first collection of short stories, Babe in Paradise was named a New York Times Notable Book of the Year and was a Los Angeles Times Best Book of the Year. When her second collection, Alone With You was published, The New York Times called her “one of California’s most celebrated contemporary writers.” Her fiction has been included in The Best American Short Stories, the O. Henry Prize Stories, as well as other anthologies. She lives in Los Angeles. For more, visit MarisaSilver.com.

"A stunning novel...Finely wrought characters and an illuminating portrait of [a] secret world...make for a powerful, often tragic tale." -- Kirkus Reviews (starred review)

"Marisa Silver's The God of War is a novel of great metaphorical depth and beauty. It stays with you like a lesson well and truly learned." -- Richard Russo, author of Empire Falls

"The God of War is such a stunning dive into a desert landscape few have understood and loved as deeply as Marisa Silver. It is no man's land, and every man's land -- there, her people wage epic battles for their lives, for their loyalties, and for their very fierce versions of love." -- Susan Straight, author of A Million Nightingales and Highwire Moon

"Marisa Silver's The God of War is as gripping as it is beautifully written. By the end I ached for these brothers, Ares and Malcolm, as if they were my own family, and I will not forget them." -- Peter Orner, author of Esther Stories and The Second Coming of Mavala Shikongo

"Marisa Silver is the author for whom we've all been waiting. With unabashed voice she steadily, bravely, unerringly tells a heartbreakingly beautiful story for our time. The God of War is the truest novel I've read in ages." -- Alexandra Fuller, author of Don't Let's Go to the Dogs Tonight