Domino: The Book of Decorating: A room-by-room guide to creating a home that makes you happy (DOMINO Books) (Hardcover) 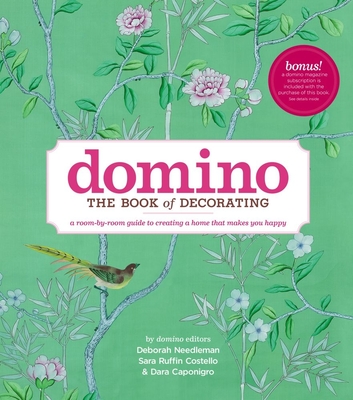 Domino: The Book of Decorating cracks the code to creating a beautiful home, bringing together inspiring rooms, how-to advice and insiders' secrets from today's premier tastemakers in an indispensable style manual. The editors take readers room by room, tapping the best ideas from domino magazine and culling insights from their own experiences. With an eye to making design accessible and exciting, this book demystifies the decorating process and provides the tools for making spaces that are personal, functional and fabulous.

During the year she launched domino, founding editor in chief Deborah Needleman was named one of the media industry's top 15 talents by Women's Wear Daily. She's since garnered many more awards for the magazine's out-of-the-gate success, along with tremendous acclaim for its fresh approach. Deborah's top-tier publishing experience began at the Washington Post, where she was photography editor for the Sunday magazine. In 1996, she was tapped by Conde Nast's House & Garden to become photo editor for its high-profile relaunch. Later she was made editor-at-large, covering garden design, landscape architecture, and interior design. Deborah's writing has appeared in Slate and the New York Times.

As creative director of domino, Sara leads the magazine's esteemed art, style and photo teams, and is often quoted in the press as a style expert. Before joining domino's launch team, she was creative director for the test issue of the highly acclaimed Living Room, from Meredith Publishing. Sara's editorial career has also included stints at Martha Stewart, Glamour and Metropolitan Home.

Dara Caponigro has been with domino since its launch overseeing the magazine's style editors, directing and styling interior shoots and writing the popular monthly column "Ask Dara." In 2005, Dara spearheaded "The domino Design Project," galvanizing industry stars to create beautifully decorated homes for 40 New York families in need. Before coming to domino, Dara directed the decorating departments at Elle Decor and House Beautiful.

"The new decor bible for how we live today."
— Albert Hadley