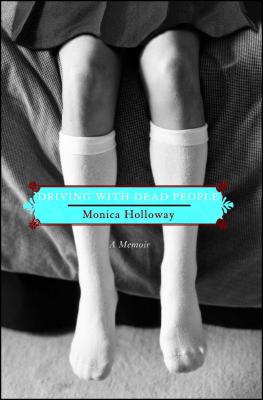 By Monica Holloway
$16.99
We Can Order This For You

Small wonder that, at nine years old, Monica Holloway develops a fascination with the local funeral home. With a father who drives his Ford pickup with a Kodak movie camera sitting shotgun just in case he sees an accident, and whose home movies feature more footage of disasters than of his children, Monica is primed to become a morbid child.

Yet in spite of her father's bouts of violence and abuse, her mother's selfishness and prim denial, and her siblings' personal battles and betrayals, Monica never succumbs to despair. Instead, she forges her own way, thriving at school and becoming fast friends with Julie Kilner, whose father is the town mortician.

She and Julie prefer the casket showroom, where they take turns lying in their favorite coffins, to the parks and grassy backyards in her hometown of Elk Grove, Ohio. In time, Monica and Julie get a job driving the company hearse to pick up bodies at the airport, yet even Monica's growing independence can't protect her from her parents' irresponsibility, and from the feeling that she simply does not deserve to be safe. Little does she know, as she finally strikes out on her own, that her parents' biggest betrayal has yet to be revealed.

Throughout this remarkable memoir of her dysfunctional, eccentric, and wholly unforgettable family, Monica Holloway's prose shines with humor, clear-eyed grace, and an uncommon sense of resilience. Driving with Dead People is an extraordinary real-life tale with a wonderfully observant and resourceful heroine.

Monica Holloway is the critically acclaimed author of the memoir Driving with Dead People. She has contributed to the anthology Mommy Wars, from which her essay "Red Boots and Cole Haans" was described by Newsday as "brilliant, grimly hilarious." She lives in Los Angeles with her family.

"Memoir, at its best, opens my heart and gives me a view into the core perfection of another. Monica does this in the most essential way, going directly to perfect storytelling laced with irony and humor. She held my heart with her raw, unapologetic honesty, and she flawlessly rendered what it is like to be a child who sees everything, endures it, and still loves with her whole being."
-- Jennifer Lauck, New York Times bestselling author of Blackbird and Still Waters

"A meticulously reported account of one girl's journey through a violent and unpredictable childhood. Holloway's strong voice and remarkable sense of humor, in spite of the horror in her past, make this an unforgettable read."
-- Hope Edelman, New York Times bestselling author of Motherless Daughters

"Joining searing childhood memoirs such as The Glass Castle and Running with Scissors comes the impressive Driving with Dead People, a fascinating, gritty, hilarious read for everyone who realized as a child -- as Monica Holloway did -- that 'we were the weird ones.' Holloway narrates her sad, funny childhood with an exquisite blend of raw honesty, deadpan wit, and compassion for her family -- and herself."
-- Leslie Morgan Steiner, L.A. Times bestselling editor of Mommy Wars

"Driving with Dead People is a heartbreaking, hilarious, and page-turning read. In the space of one sentence Monica Holloway can break your heart and make you laugh out loud at the same time. Her memoir has the momentum of a good mystery novel -- the kind you stay up all night reading to find out what happens to the heroine, because you love her so much. This is a stunning debut of a writer who deals with difficult material and makes it fresh and moving."
-- Barbara Abercrombie, author of Writing Out the Storm and Courage & Craft