Moorish Circle 7: The Rise of the Islamic Faith Among Blacks in America and it's masonic origins (Paperback) 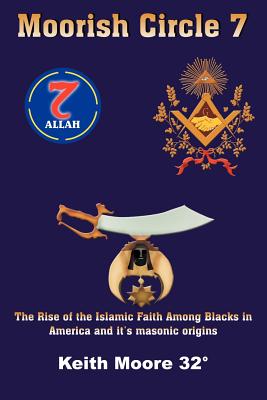 This book is based on the theory that the black Muslim movement was created from the knowledge of the Masonic order. In the early decades of the 20th century, noble drew ali established a political and religious organization known today as the Moorish Science Temple of America. It was this organization that exposed black to something other than the normal Christian influences of that day. Ali a high degree freemason, incorporated various Masonic teachings from an auxiliary group. Known as the AEAONMS ancient Egyptian Arabic order of noble of the mystic shrine A pseudo Islamic/Arabic oriental organization that served as a wake up call to a lost knowledge. A knowledge that was taken away from Africans during the slave trades. The theory behind this book is that the majority of the slaves that were taken from the west coast of Africa were practicing Muslims, and these Muslims were forced to convert to Christianity under the strong oppression of slavery. At one time Afro-Americans were the biggest minority in the American society. About 90% of the today's population of black's are descendants of slaves that were brought to America for working on plantations since the 16th century. At the beginning of the 19th century most of the so-called Negroes lived in the plantation areas of the Southern States. After the Civil War and the abolition of slavery it wasn't until the early 1920's and 30's that black's were beginning to experiment with other faiths. Of all the faiths Islam became the fastest growing religion and the most popular. This book by far is in no way a research into black history, instead it covers a more deeper aspect of history in which I call the history behind the history. It explores the true Asiatic origins of the ancient religions of Hinduism, Buddhism well as the Islamic faith. Finally It explores the Masonic symbolisms of ali's Moorish science dogma digging deeper into the esoteric side of his Aquarian/Masonic teaching explaining their origins and discovering an age old wisdom that had been kept hidden from the human eye. One would think that Africans in the Americas would have rejected the religious tradition of their European oppressors taking into consideration that African religions are far older & they possess more sources of knowledge & spiritual salvation. Yet there are those who have turned away from traditional Christian dominated environments in order to find a greater understanding of themselves and the world in which they live. One alternative has been to seek knowledge in the various religious groups that arose in the 20th century.