On Time: A History of Western Timekeeping (Paperback) 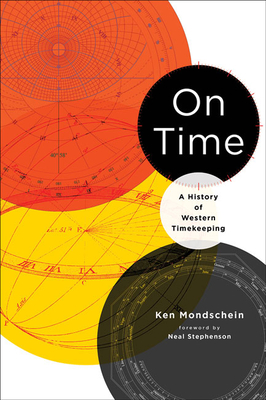 An approachable, accessible history of timekeeping and the impact of the increasing precision and accuracy of time on humanity.

Western culture has been obsessed with regulating society by the precise, accurate measurement of time since the Middle Ages. In On Time, Ken Mondschein explores the paired development of concepts and technologies of timekeeping with human thought. Without clocks, he argues, the modern world as we know it would not exist. From the astronomical timekeeping of the ancient world to the tower clocks of the Middle Ages to the seagoing chronometer, the quartz watch, and the atomic clock, greater precision and accuracy have had profound effects on human society--which, in turn, has driven the quest for further precision and accuracy. This quest toward automation--which gave rise to the Gregorian calendar, the factory clock, and even the near-disastrous Y2K bug--has led to profound social repercussions and driven the creation of the modern scientific mindset.

Surveying the evolution of the clock from prehistory to the twenty-first century, Mondschein explains how both the technology and the philosophy behind Western timekeeping regimes came to take over the entire world. On Time is a story of thinkers, philosophers, and scientists, and of the thousand decisions that continue to shape our daily lives.

Historian Ken Mondschein is a full-time contingent faculty member who teaches at the University of Massachusetts-Mount Ida, Boston University, and Anna Maria College. He is the editor and translator of Fencing: A Renaissance Treatise and the cotranslator of Flowers of Battle, Volume III: Florius de Arte Luctandi.