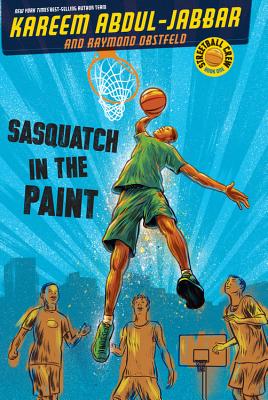 By Kareem Abdul-Jabbar, Raymond Obstfeld
$16.99
Email or call for price.

This is book number 1 in the Streetball Crew series.

Theo Rollins is starting eighth grade six inches taller, and his new height is making everyone expect more from him. Coach Mandrake wants to transform him from invisible science geek into star basketball player, even though Theo has little experience with the game. When Theo tries to hone his skills by playing pick-up ball in the park, kids are eager to include him at first; then they quickly see that he has no control of his gangly body. A girl named Rain even dubs him “Sasquatch.” To make matters worse, all his time spent on training is starting to hurt his science club’s chances of winning the “Aca-lympics,” the school’s trivia competition. Just when Theo thinks he can’t handle any more pressure, he’s accused of stealing. Can he find the real thief before he is kicked off the basketball and science club teams, or will his attempt at sleuthing be yet another air ball?
Loosely based on challenges that NBA legend Kareem Abdul-Jabbar faced while growing up, Sasquatch in the Paint is a slam dunk for fans of basketball action and absorbing mysteries.
Praise for Sasquatch in the Paint

"A crisp tale of sports, smarts and what it means to be your own man or woman—or boy or girl, if you happen to be 13...It seems to be an embarrassment of riches to be, say, one of the best basketball players in history and also write tightly entertaining novels for kids, but there you have Abdul-Jabbar. Fearless, caring sports fiction."
—-Kirkus Reviews (starred review)

"A humorous novel that delivers a heartwarming story about growing up, facing down bullies, and learning what true friendship is all about."
—-School Library Journal
"The depth and realism Abdul-Jabbar and Obstfeld bring to the novel keep it from being a run-of-the-mill sports story...Readers will feel a kinship with Theo as he maneuvers through tough but realistic choices."
—-Publishers Weekly
"This smart, sensitive novel is full of simple truths that extend far beyond the court."
—-Booklist
"This funny and inspirational novel based on Kareem's sudden growth spurt as a middle-schooler captures the excitement of playing basketball and the anxiety of growing up--while growing tall, which I know a little something about. Kids will learn about the wonderful world of basketball and the importance of friendship and following your dreams."
—-Magic Johnson

Kareem Abdul-Jabbar played basketball for the Milwaukee Bucks (1969-1975) and for the Los Angeles Lakers (1975-1989), helping his teams win six NBA Championships. He is the NBA's all-time leading scorer, with 38,387 points. He also holds the records for the most field goals (15,837) and the most minutes played (57,446). Abdul-Jabbar gave the game the skyhook, considered basketball's most classic, and lethal, offensive move. He was inducted into the Basketball Hall of Fame in 1995. Since retiring, Abdul-Jabbar has been an actor, basketball coach, and an author, focusing on history. His previous titles include GIANT STEPS, KAREEM, BLACK PROFILES IN COURAGE, A SEASON ON THE RESERVATION, BROTHERS IN ARMS, and ON THE SHOULDERS OF GIANTS: MY JOURNEY THROUGH THE HARLEM RENISSANCE, and the children's non-fiction book about inventors, WHAT COLOR IS MY WORLD?, won the NAACP award for Best Children's Book. In 2012 he was selected as a U.S. Cultural Ambassador.


Raymond Obstfeld is a novelist, screenwriter, and nonfiction writer. His second novel, DEAD HEAT, was nominated for an Edgar Award; he also wrote an award-winning YA novel entitled JOKER AND THE THIEF. Obstfeld has previously collaborated with Abdul-Jabbar on the sports memoir ON THE SHOULDERS OF GIANTS: MY JOURNEY THROUGH THE HARLEM RENISSANCE, and the nonfiction picture book WHAT COLOR IS MY WORLD?. Obstfeld currently teaches creative writing at Orange Coast College as an associate professor.