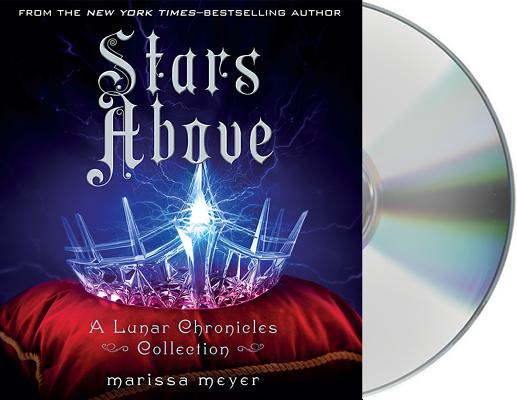 "Soler's narration fits the tone of each story and provides unique voices for each character, including a breathy, high-pitched voice for Winter and a harder, cruel voice for Mistress Sybil." — AudioFile Magazine

The enchantment continues. . . .
The universe of the Lunar Chronicles holds stories - and secrets - that are wondrous, vicious, and romantic. How did Cinder first arrive in New Beijing? How did the brooding soldier Wolf transform from young man to killer? When did Princess Winter and the palace guard Jacin realize their destinies?

With six stories - two of which have never before been published - and an exclusive never-before-heard excerpt from Marissa Meyer's novel, Heartless, about the Queen of Hearts from Alice in Wonderland, Stars Above is the essential audiobook for fans of the bestselling and beloved Lunar Chronicles.

Marissa Meyer is the #1 New York Times–bestselling author of the Renegades Trilogy, The Lunar Chronicles series, the Wires and Nerve graphic novels, and The Lunar Chronicles Coloring Book. Her first standalone novel, Heartless, was also a #1 New York Times bestseller. Marissa created and hosts a podcast called The Happy Writer. She lives in Tacoma, Washington, with her husband and their two daughters.

Rebecca Soler is a film and voiceover actress who won a 2009 AudioFile Earphones Award for her narration of After by Amy Efaw. Her audiobook credits include work by authors such as Judy Blume, James Patterson and Sarah Dessen. Soler has also narrated the popular young adult series The Lunar Chronicles by Marissa Meyer. Her voice over credits include various video games, like Star Wars: The Old Republic and Red Dead Redemption and television shows such as Pokemon, Yu-Gi-Oh, and Teenage Mutant Ninja Turtles. She lives in New York City.

"Rebecca Soler once again lends her considerable talents to the series...Series fans will be delighted to have expanded backstories, and they will be trilled to hear about happy endings in store for their favorite characters."--School Library Journal