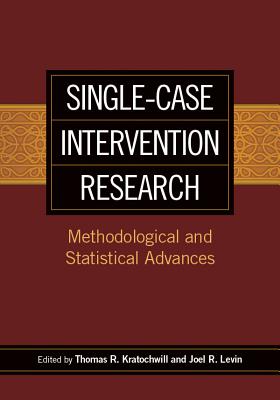 Single Case Design (SCD) is a highly flexible method of conducting applied research where there is no control group/condition or possibility of collecting data from large groups of participants. Thanks to remarkable methodological and statistical advances in recent years, single case design (SCD) research has become a viable and often essential option for researchers in applied psychology, education, and related fields. This book, with contributions from leading experts, not only summarizes the state of the field today but offers the latest information and tools for researchers. It is a compendium of information and tools for researchers considering SCD research, a methodology in which a subject serves as the experimental control.

Thomas R. Kratochwill, PhD, is Sears Roebuck Foundation-Bascom Professor at the University of Wisconsin-Madison, director of the School Psychology Program, and a licensed psychologist in Wisconsin. He is the author of more than 200 journal articles and book chapters. He has written or edited more than 30 books and has made more than 300 professional presentations. In 1977 he received the Lightner Witmer Award from APA Division 16 (School Psychology). In 1981 he received the Outstanding Research Contributions Award from the Arizona State Psychological Association and in 1995 received an award for Outstanding Contributions to the Advancement of Scientific Knowledge in Psychology from the Wisconsin Psychological Association. Also in 1995, he was the recipient of the Senior Scientist Award from APA Division 16, and the Wisconsin Psychological Association selected his research for its Margaret Bernauer Psychology Research Award. In 1995, 2001, and 2002 the APA Division 16 journal School Psychology Quarterly selected one of his articles as the best of the year. In 2005 he received the Jack I. Bardon Distinguished Achievement Award from APA Division 16. He was selected as the founding editor of School Psychology Quarterly in 1984 and served as editor of the journal until 1992. In 2011 Dr. Kratochwill received the Lifetime Achievement Award from the National Register of Health Service Providers in Psychology and the Nadine Murphy Lambert Lifetime Achievement Award from APA Division 16. Dr. Kratochwill is a fellow of APA Divisions 15 (Educational Psychology), 16, and 53 (Society of Clinical Child and Adolescent Psychology). He is past president of the Society for the Study of School Psychology and was cochair of the Task Force on Evidence-Based Interventions in School Psychology. He was also a member of the APA Task Force on Evidence-Based Practice for Children and Adolescents and the recipient of the 2007 APA Distinguished Career Contributions to Education and Training of Psychologists. He is the recipient of the University of Wisconsin-Madison Van Hise Outreach Teaching Award and a member of the University's teaching academy. Most recently he has chaired the What Works Clearinghouse Panel for the development of Standards for Single-Case Research Design for review of evidence-based interventions. Joel R. Levin, PhD, is Professor Emeritus of Educational Psychology, University of Wisconsin-Madison and University of Arizona. He is internationally renowned for his research and writing on educational research methodology and statistical analysis as well as for his career-long program of research on students' learning strategies and study skills, with more than 400 scholarly publications in those domains. Within APA, he is a Fellow of Division 5 (Evaluation, Measurement and Statistics) and Division 15 (Educational Psychology). From 1986 to 1988 Dr. Levin was head of the Learning and Instruction division of the American Educational Research Association (AERA), from 1991 to 1996 he was editor of APA's Journal of Educational Psychology, and from 2001 to 2003 he was coeditor of the journal Issues in Education: Contributions From Educational Psychology. During 1994-1995 he served as chair of APA's Council of Editors, and from 1993 to 1995 he was an ex-officio representative on APA's Publications and Communications Board. Dr. Levin chaired an editors' committee that revised the statistical-reporting guidelines sections for the fourth (1994) edition of the APA Publication Manual, and he served on a similar committee that revised the fifth (2001) and sixth (2010) editions of the manual. From 2003 to 2008 he was APA's chief editorial advisor, a position in which he was responsible for mediating editor-author conflicts, managing ethical violations, and making recommendations bearing on all aspects of the scholarly research and publication process. Dr. Levin has received two article-of-the-year awards from AERA (1972, with Leonard Marascuilo; 1973, with William Rohwer and Anne Cleary) as well as awards from the University of Wisconsin-Madison for both his teaching and his research (1971 and 1980). In 1992 he was presented with a University of Wisconsin-Madison award for his combined research, teaching, and professional service contributions, followed in 1996 by a prestigious University of Wisconsin-Madison named professorship (Julian C. Stanley Chair). In 1997 the University of Wisconsin-Madison's School of Education honored Dr. Levin with a distinguished career award, and in 2002 he was accorded APA Division 15's highest research recognition, the E. L. Thorndike Award, for his professional achievements. In 2010 AERA's Educational Statisticians Special Interest Group presented him with an award for exceptional contributions to the field of educational statistics, and most recently, in 2013 the editorial board of the Journal of School Psychology selected his 2012 publication (with John Ferron and Thomas Kratochwill) as the Journal's outstanding article of the year.