Knowing It When You See It: Henry James/Cinema (Suny Series) (Paperback) 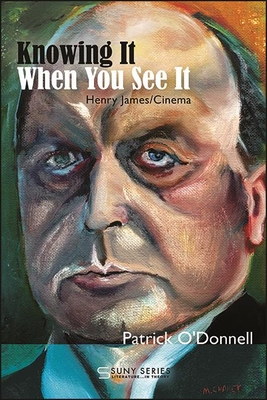 Perched as he was at the beginning of literary modernism and the evolution of film as a medium, Henry James addressed a cluster of epistemological and aesthetic issues related to the visualization of reality. In Knowing It When You See It, Patrick O'Donnell compares several late novels and stories by Henry James with a series of films directed by Michael Hanek , Alfred Hitchcock, Quentin Tarantino, Christopher Nolan, and Lars Von Trier. O'Donnell argues that these issues find parallels in films made at the other end of an arc extending from the last decades of the nineteenth century to the initial years of the twenty-first. In mapping affinities between literature and film, he is not concerned with adaptation or discursivity, but rather with how the visual is represented in two mediums--with how seeing becomes knowledge, how framing what is seen becomes a critical part of the story that is conveyed, and how the perspective of the camera or the narrator shapes reality. Both James and these later auteurs think visually in ways that inter-illuminate their fictions and films, and newly bring into relief the trajectory of modernity in relation to visuality.

Patrick O'Donnell is Professor Emeritus of English at Michigan State University. He is the author and editor of many books, including A Temporary Future: The Fiction of David Mitchell and (coedited with David W. Madden and Justus Nieland) The Encyclopedia of Twentieth-Century American Fiction.