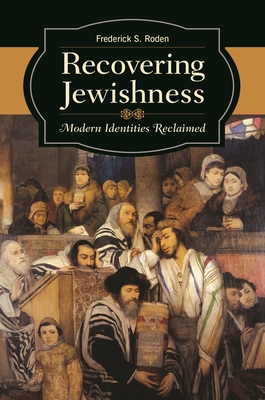 By Frederick S. Roden
This item is not available.

Many scholars of the modern Jewish identity focus on the ways in which the past two centuries have resulted in the loss of Jewishness: through assimilation, intermarriage, conversion to other faiths, genocide (in the Holocaust), and decline in religious observance. In this work, author Frederick S. Roden presents a decidedly different perspective: that the changes in Judaism throughout the 19th and 20th centuries resulted in a malleable, welcoming, and expanded Jewish identity--one that has benefited from intermarriage and converts to Judaism.

The book examines key issues in the modern definition of Jewish identity: who is and is not considered a Jew, and why; issues of Jewish authenticity; and the recent history of the debate. Attention is paid to the experiences of individuals who came to Judaism from outside the tradition: through marrying into Jewish families and/or choosing Judaism as a religion. In his consideration of the tragedy of the Holocaust, the author examines how a totalitarian regime's racial policing of Jewish identity served to awaken a connection with and reconfiguration of what that Jewish identity meant for those who retrospectively realized their Jewishness in the postwar era.

Frederick S. Roden, PhD, is associate professor of English at the University of Connecticut.